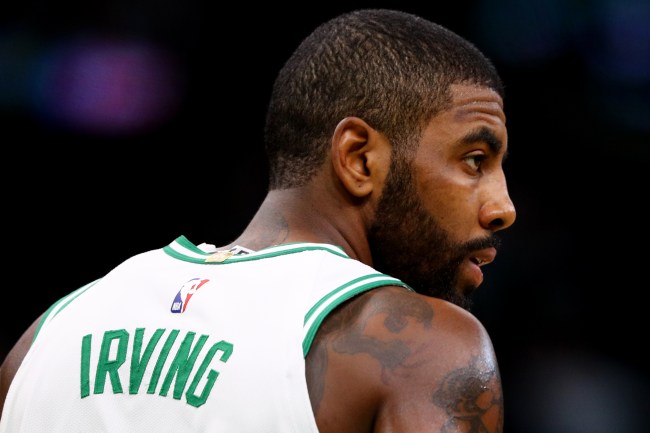 Kyrie Irving of the Boston Celtics has some of the sickest handles on the planet, and, thanks to his new signature Nike shoes, the Kyrie 5’s, he’s got some of the sickest kicks on the hardwood, too. Not that his previous collections weren’t awesome, but the latest Kyrie’s just have a certain something special about them.

With Nike releasing the first look at the new Kyrie 5’s today, we dug up some pictures and details about the shoe — which, according to Nike, came from Kyrie Irving’s inspiration to tell his 17-year-old self this: “Look how far we’ve come,” and include a venus flytrap inspired containment system. Take a look at the point guard’s latest shoe below, which are set to launch November 22 in the Blk Mgc colorway in the U.S.

Another look at what could be the Nike Kyrie 5: https://t.co/Be9aCU1NLH pic.twitter.com/bt5MvKOcf5

As I said in the headline, told you the Kyrie 5’s look F’in awesome.

In addition to the inspiration from a venus flytrap, here are some of the other specifications and details of Nike’s latest Kyrie Irving signature shoe, described by the shoe’s lead designer, Benjamin Nethongkome.

1. An articulated forefoot zoom bag. “In the Kyrie 5, it is distributed across the entire forefoot footbed, working with his quick-change-of-direction style of play. When he’s banking, cutting, or attacking in drastic degrees, his foot will engage the Air Zoom Turbo unit providing responsiveness at all directions,” explains Nethongkome.

3. A new traction pattern. “The traction system for the KYRIE 5 creates stability through discreet geometries,” says Nethongkome. “Have you seen the Hamsa hand tattoo on his left arm? It’s a symbol of protection for him, it kind of shields him from all the bad juju, and so it became the jump-off point for the shaping of the outsole patterns. He wants to have more than just a basketball shoe. And this allows us to apply more of his spirit throughout the shoe.”

Overall, Nike worked with Kyrie Irving to try and get his signature, Kyrie 5’s to show a little bit of his own personality. That’s why Kyrie added that the latest kicks are something that he tried to “integrate who I am and the principles I live by into my signature line and make a great, great shoe,” per Nike. After looking at these things, I’d say Ky and Nike accomplished that perfectly.