#Tech
BroBible may earn a commission if you buy a product or service via links in this article.
by Paul SaccaAugust 9, 2017 5:58 pm 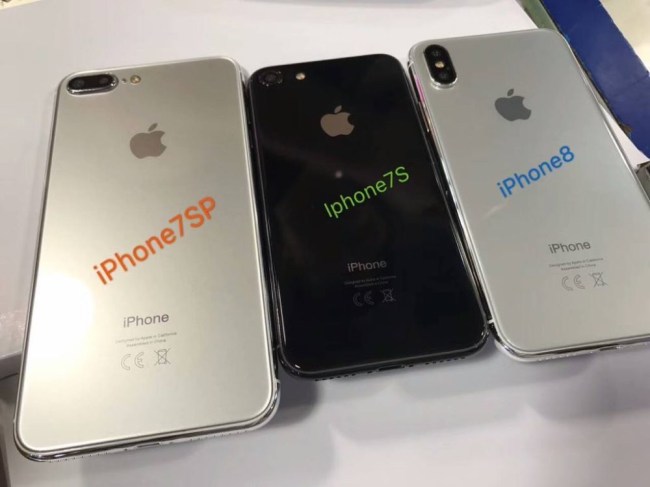 We are marching towards Apple’s unveiling of the brand new iPhone 8 in September and we are eagerly awaiting to see what the drastically redesigned new handset looks like. We are also receiving a new 4.7-inch iPhone 7s and 5.5-inch 7s Plus that are upgrades to the iPhone 7 and 7 Plus. We’ve seen plenty of leaks regarding the iPhone 8, but not much on the iPhone 7s or 7s Plus. Until today, when we get to possibly see all three new phones side-by-side.

The photo of the new lineup of Apple devices comes to us via 9To5Mac and shows the 7s, 7s Plus and iPhone 8 in all their glory. These models you see are dummies, but you get to compare the subtle upgrades in the 7s and 7s Plus which includes going from an aluminum body to a glass material as well as antenna bands that are more hidden. The glass material will allow for wireless charging. Besides the glass casing, the new phones look like their predecessors with the same horizontal dual-lens rear camera, ports, buttons, thick front bezels, and Touch ID Home button. Meanwhile, the iPhone 8 shows off its beautiful near-bezel-less OLED display and does away with the Home button to give it a larger screen. YouTuber Danny Winget shared a new video with dummies of the highly-coveted phones.

According to KGI Securities analyst Ming-Chi Kuo, the new iPhones are said to come in three colors: black, silver, and gold.

While the iPhone 8 does not have a Home button and is rumored to have a facial recognition authentication instead of Touch ID, the iPhone 7s Plus and the iPhone 7s will retain standard Home buttons and Touch ID functionality.

Another possible new feature for the iPhone 8 is that the handset will silence notifications when the user is actively utilizing the phone. Developer Guilherme Rambo believes that the iPhone 8 will have a front-facing 3D sensor which will detect if the user is looking at the phone and then silence notifications. The two front cameras on the iPhone 8 will be tracking your face at all times and will probably allow you to instantaneously unlock the phone just by looking at the screen. Face recognition could replace Touch ID in unlocking other sensitive apps. Is it September yet?

What @jsnell talked about on the last @_upgradefm is true: the iPhone will suppress notification sounds if you're looking at it pic.twitter.com/eFzKUfZYDx