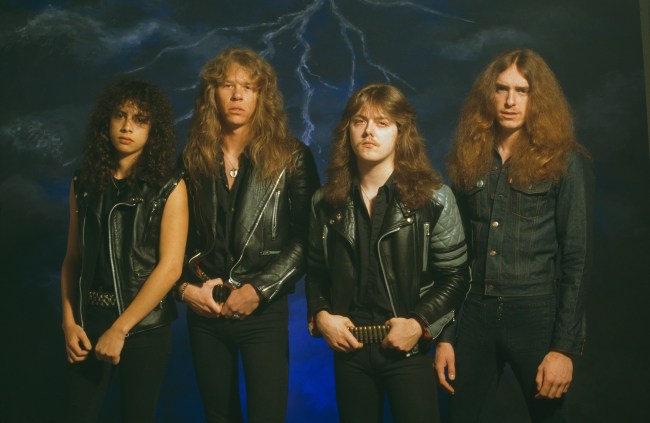 I think it’s safe to say that the members of Metallica are pleased with how their fight against Napster in 2000 turned out because they’re all absurdly wealthy old men now. But why stop at just being worth a few hundred million dollars when you push for that ‘tres commas’ club and inch towards a billion?

That must’ve been the sentiment amongst the band members because they’ve recently launched a major push in merchandising. Last week they announced a partnership with Nixon watches to launch a line of Metallica-themed watches in November (currently available for pre-order).

I actually dig some of the watches in the collection, the ones that don’t have ‘Metallica’ across the watch face instead of Nixon.

This week, Metallica announced that they’re jumping headfirst into the booze business by launching ‘Blackened American Whiskey’ named in honor of the first track on the 1988 album And Justice for All.

Blackened American Whiskey is currently available for pre-order on ThinkLiquor.com and SpiritedGifts.com, but it will be rolled out in conjunction with the band’s tour beginning on September 2nd. The whiskey can be found at select concerts as well as in bars and stores surrounding select tour dates.

Each of the 5,000 bottles sold will come with a playlist on Spotify and Apple Music.

Metallica announced Blackened American Whiskey in a press release earlier and the band seems super stoked about this:

It’s not often that we announce a brand new, never-been-done-before Metallica endeavor, so we’re incredibly excited and super proud to introduce Blackened American Whiskey. Those of you who are whiskey connoisseurs may have heard some rumblings earlier this summer as we’re honored to partner with Master Distiller extraordinaire, Dave Pickerell, to create a unique blend of straight American whiskey available in select U.S. cities later this week and online at thinkliquor.com or spiritedgifts.com.

This collaboration is the perfect match. Legendary in the spirits community, Dave is a chemical engineer who has revolutionized the distilling processes with techniques like solera aging and triple-finishing. He experienced the power of soundwaves during his time as a student and then a Professor of Chemistry at West Point, home to the world’s largest church organ. When the lowest note would reverberate through the halls, “the whole building would tremble, it would really shake your guts,” Dave says. With that in mind, “Blackened” isn’t just the name of a song on …And Justice For All and now on the bottle; it literally helps to shape the flavor! That’s right, the blend of bourbons, ryes, and whiskeys from all across North America, carefully selected by Dave himself, is housed in black brandy barrels and inundated with low hertz sound waves so intense that it actually enhances the molecular interaction and ultimately the finish of the whiskey.

They have a few Blackened American Whiskey events already planned which they call out in the press release so if you happen to live in and around Wisconsin and are planning on attending any of the Metallica concerts you should add these to your calendar:

It’s easy to see why the band would want to do this. They’re already selling a decent amount of booze at their concerts so why not roll out their own booze and take home a bigger slice of the pie?

The jury’s out on how it’ll taste but I’m sure it’ll be good enough to merit the $52/bottle pre-order price.