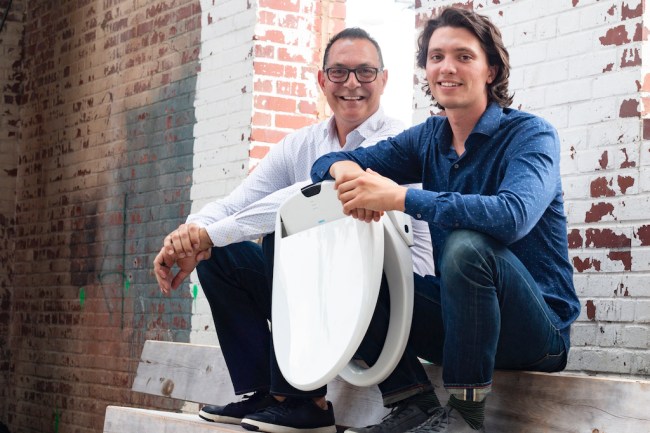 Presented in partnership with Omigo…

Being an entrepreneur is tough, as it takes more than just a good idea to actually become successful. And anybody who’s ever watched the TV show Shark Tank knows there’s a major difference between having a product and being a business, with the latter being more sustainable with a real growth opportunity — especially if looking for a partner or investor.

Now imagine all that goes into starting an actual business and adding your dad into the mix. For Tom Lotrecchiano, the cofounder of Omigo, that’s exactly what he did, as the twentysomething, former-MBA student teamed up with his dad, “Big” Tom Lotrecchiano, to develop a modern bidet for American’s to stay clean and healthy. 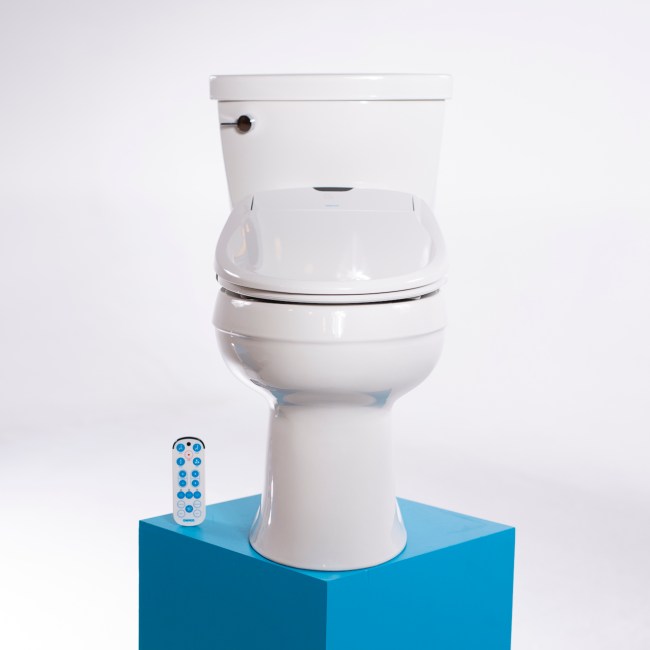 Most people probably think bidets are only for high-class Europeans, but “The Tom’s” are hoping Omigo changes that perception, with the bathroom accessory bring a high-tech tool to your squatting habits. Just look at some of the features their product has.

Omigo has the full Luxury Bidet Toilet Seat (Omigo PDP), as well as the Essential Bidet Attachment (Element PDP), so there’s something for everyone who’s looking to upgrade their bathroom clean up.

Since I was interested in hearing more about how Omigo went from idea to concept to a living, breathing business, I sat down with Tom Lotrecchiano to get the inside scoop about how things got started — including the challenges he and his dad have overcome, and how often the two butt heads with one another over business decisions. 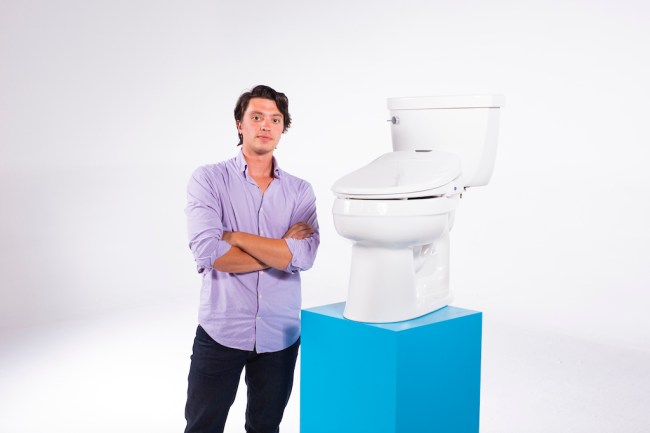 BroBible (BB): The obvious question is this: What made you and your dad want to start a bidet company?

Tom Lotrecchiano (TL): “Well my dad and I have always wanted to start a business together. I’ve been working for him and for one of his companies since high school in various capacities, mainly warehouse and entry-level technical work, but I was always around. It was inspiring to be a piece of the puzzle in a successful business your father had built, so I’ve followed that lead for most of my life. Now did we ever expect to start a bidet brand together? No. But the timing was right and the idea was perfect.”

BB: Did you two see a need for a healthier solution after doing your business in the bathroom?

TL: “It really started after we had our first run-in with a Japanese toilet seat in 2015. Neither of us had ever heard of the thing, let alone used one, so we were hesitant at first. But it really only took a single wash for us to realize the err of our ways. Why had we been using dry paper to clean ourselves our entire lives when a product like this existed? Why didn’t everyone use fresh water to clean themselves? We were immediate converts and knew we had to spread the word to our fellow Americans.”

BB: So what’s the response been?

TL: “The response has been great! Once an Omigo hits your front doorstep, you install that bad boy in 20 minutes, take your first wash, and you’re a changed human. People love their Omigo bidets. Our bidet attachment (the Element) came out about a year ago and has been wildly popular; the five-star reviews roll in every day.” 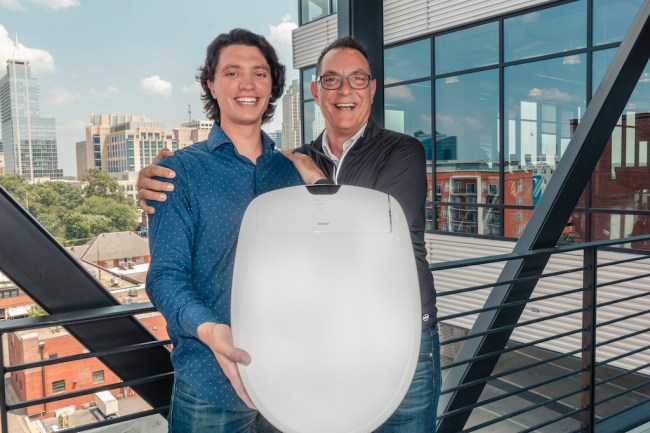 BB: Talk about some of the difficulties when marketing the product to Americans. A bidet isn’t something most people think of having, so how have you overcome any difficulties in messaging?

TL: “No one wants to think about wiping or cleaning their butt. It’s something us Americans have been trained to do by our parents, and them by theirs, and so on — and it isn’t something we bring up at the dinner table. So to break into the conversation surrounding a private and intimate part of your daily routine isn’t easy. We’ve taken an approach of being real with our audience. We use a little bit of humor (because poop is just funny) and focus on the facts — that being ‘washing is so much better than wiping.’ So we give it to you straight, make incredible modern bidets that integrate directly with your existing toilet, and let the experience do the talking.”

BB: When you first started Omigo with your dad, you were interested in getting your MBA, how has your experience starting a business been an even better experience for you?

TL: “Well I don’t have exams, which is nice. No, but really, this experience has been invaluable, and looking back I wouldn’t have done it any other way. To be able to learn from my dad who has been in the dot com space for almost 20 years is like having an on-demand professor and expert in the field rolled into one. It has been a challenge to learn about the ecommerce space, but I know I’m moving forward with more than an MBAs worth of knowledge and experience.”

BB: I imagine this has tested your leadership, so talk about a time when you had to challenge your dad when making a business decision.

TL: “I manage the brand’s day-to-day right now, and my dad has taken on the supervisory role. So, essentially, he’s in a boss position to me — and that’s the way it should be (laughs)! He has so much wisdom, knowledge, and experience that we need him to be making high-level decisions and offering perspective.

“Since we are kin, the communication style can be very casual. And with casual communication comes misunderstandings and mistakes are eventually made. So I’ve had to flip the script on him a few times and give him some constructive feedback in order to improve our lines of communication, and that was definitely a leadership test for me. I passed.”

BB: Have there been any moments when you regretted the choice to start the brand with your pops?

TL: “I wouldn’t say I’ve regretted this decision, but there have been some tough times for sure. My dad and I are very similar people, so there are moments when we butt heads because we’re both being stubborn in the same way — but that just gives us a chance to look in the mirror and try to better ourselves. There have also been some low times for the brand at the beginning when sales were slow and it seemed like nothing we were doing was working. We kept grinding away, though, and eventually found a formula for success.” 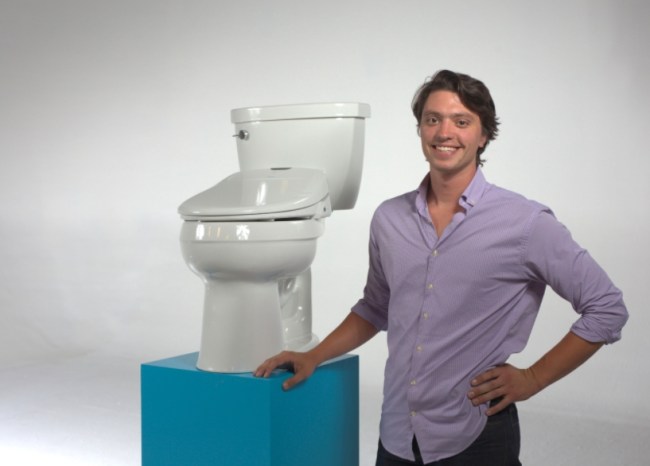 BB: Tell me why everyone needs a bidet in their bathroom. What’re the benefits over just wiping?

TL: “Do you poop? Then you need a bidet. Think about it! You’re taking a handful of dry paper and wiping yourself ‘clean’ after going to the bathroom? That’s gross. Not only do bidets get you cleaner than toilet paper, but you feel fresher after every go. It’s also great for women during menstruation and pregnancy. It keeps people clean before and after sex, which is great for everyone. And anyone who has had surgery or a permanent disability knows that something as simple as wiping with toilet paper becomes a challenge. The benefits outweigh the cost 100-to-1.”

BB: Do you have anything planned to expand Omigo beyond just a bidet? If so, any behind-the-scenes intel?

TL: “We just launched the OmigoGS which is our latest bidet toilet seat. So go check that out. But I can let you be the first to know that we will be launching a bamboo bidet towel in the next month. They’re super soft hand towels that you use to dry off after washing with your Omigo bidet — it sounds gross now, but you’ll realize that your backside is so clean after washing with our bidet that the cloth really is used just to dry off. So keep your bananas peeled for that one.”

BB: Is there one function of the Omigo bidet that you find most helpful, or that your community says they love the most?

TL: “On our luxury bidet toilet seat, the favorite feature is the customizable wash. You control the temperature, pressure, width, and location — because no two butts are the same, and no two poops are the same. The LED night light and heated seat are also super popular. Once you start sitting on a heated toilet seat you can’t go back to cold plastic.”

BB: What’s the best advice you can give a hopeful entrepreneur, based off of your experiences thus far?

TL: “Find your idea and go for it. Don’t wait for the perfect product or idea to come along, there is no such thing. Start strong, keep your head down, don’t falter when it gets tough, and surround yourself with smart people with whom you trust.”