Attention Beer-Lovers: This ‘K-Cup Machine’ For Brewing Your Own Craft Beer At Home Is A Game Changer

#bro inventions
BroBible may earn a commission if you buy a product or service via links in this article.
by Brandon WenerdApril 14, 2017
Facebook Twitter Reddit Flipboard

If you love kickin’ back in your favorite patio chair with a delicious pint of craft beer, the Pico C is an absolute game-changer. A couple years ago The Pico, a.k.a. the “Keurig for Craft Beer” hit the market with an awesome pitch: Throw a PicoPak (a.k.a a pod) from craft breweries like Dogfish Head in your machine and brew the freshest beer you’ll ever taste outside a brewery itself. 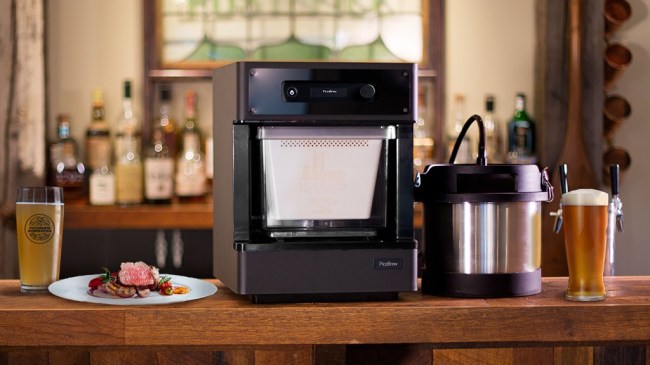 Two years later, Pico is back on Kickstarter with the most advanced version of the brewing system yet. Now you can use the machine to home brew for all your friends, complete with a variety of new PicoPaks:

The new Pico Model C is a smart craft beer brewing appliance that allows anyone to brew 5L kegs of professional quality craft beer using ingredient-and-recipe PicoPaks from great craft breweries around the world.  Pico C builds on the technology created for its big brother, the award-winning Pico Model S but is even easier to use and more affordable.  In fact, Pico C is the easiest way to brew fresh craft beer from breweries around the world or custom craft your own brew innovations.

Peep the entire project over at Kickstarter, where it’s already raised over $800,000 from craft beer enthusiasts. If you love home brewed but hate the hassle, it’s a pretty much a must-have.