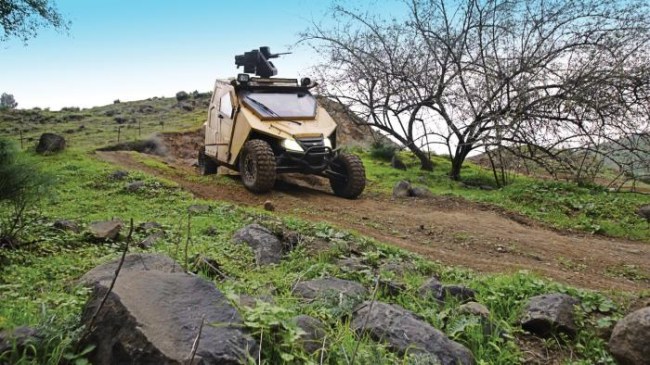 If you are in the market for a heavily armored ATV that is equipped with a machine gun? Well, the Plasan Yagu might be for you. This ultra-lightweight tactical military vehicle is perfect for special ops that need to venture into remote and rough terrain. Plasan unveiled the Yagu this month at the Expo Seguridad in Mexico City and it is already turning heads.

Plasan Sasa, an Israeli manufacturer of armored vehicles, released the light and agile Yagu to fill the void for less expensive and mobile tactical military units. The Yagu is built on an Arctic Cat Wildcat 4x 1000 that has a 95-horsepower 1,000cc V-twin engine with automatic transmission. The Wildcat can switch between two and four-wheel drive modes.

The Yagu has a layer of ballistic steel that is a third of an inch thick, which means the Yagu weighs over 3,300 pounds, more than twice the weight of a standard Wildcat. Yagu’s composite armor can withstand gunfire from typical military weapons including high-powered rifle rounds. This vehicle also has B6+ level protection on the front and side windows to protect the crew of three. However, the vehicle’s auxiliary power unit and air conditioning system in the rear are both exposed.

The sleek Yagu also has a roof-mounted light weapons system that can be controlled from inside the cabin. The vehicle can also be equipped with a drone launching system that can provide the crew with a birds-eye view of their surroundings. The drone can stay airborne for 27 minutes.

Plasan is marketing the Yagu as a vehicle for law enforcement duties in remote areas, border patrol, and as a lightweight vehicle for special operations forces as well as transportation around military bases that are susceptible to an attack. “It is a truly usable combat vehicle, deployable for use by special forces, border guards, or on counter-terror operations,” Plasan said in a statement. “Easily maneuverable in urban environments, and highly mobile off-road, there is nowhere that Yagu can’t take the chase.” Can I trade in my old Wildcat for one of these?