#trucks
BroBible may earn a commission if you buy a product or service via links in this article.
by Marcus AmickFebruary 15, 2018 4:47 pm 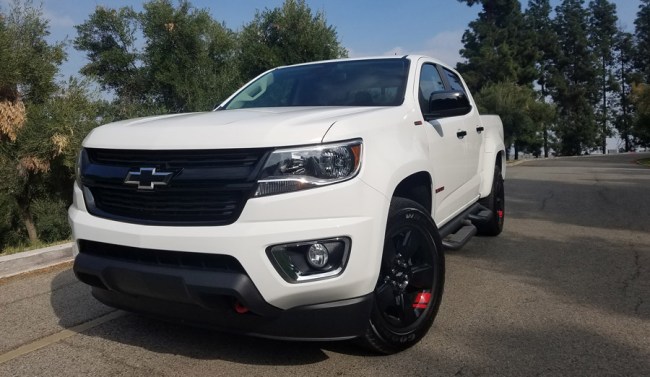 The 2018 Chevrolet Colorado Redline, which BroBible recently landed for a test drive, proves that those monstrous full-size pickups aren’t the only ones capable of holding their own on the street. In fact, the mid-size hauler is arguably one of Chevy’s biggest sleepers of 2018.

Now, don’t get us wrong: That’s not to say that there weren’t some other notable Chevy rollouts last year that were deserving of more attention. But the Colorado Redline is, by far, one of our favorite.

The thing that impresses us most about the Chevy pickup is how well it pulls off the idea of a factory-built custom truck, without taking away from the original essence of the vehicle. That’s a true skill that doesn’t get nearly the kind of respect it deserves.

Then again, the Colorado Redline was birthed out of the Chevy team charged with coming up with the carmaker’s custom creations aimed at turning heads at the annual SEMA show in Las Vegas. It’s there, where thousands of fans flock to see some of the most wicked rides known to man, where real modern-day, road stars are born. Or to put it more bluntly, if you’re a concept and can’t stir up some buzz at SEMA, there’s a good chance that you’ll never see the light of day as a production vehicle.

The Colorado Redline, which made its debut as a concept at SEMA in 2015, earned its stripes as a special edition package in early 2017, with a number of other Chevy vehicles. But the pickup kind of got lost in the madness of some bigger volume launches for the Detroit carmaker.

Sure, some might argue that the Redline is simply a Colorado with a few repackaged offerings and extra trim enhancements, which could explain why it fell under the radar. But it’s those added details that really gives the model a more distinct personality, for those who tend to like a bit more custom appeal in their vehicles. 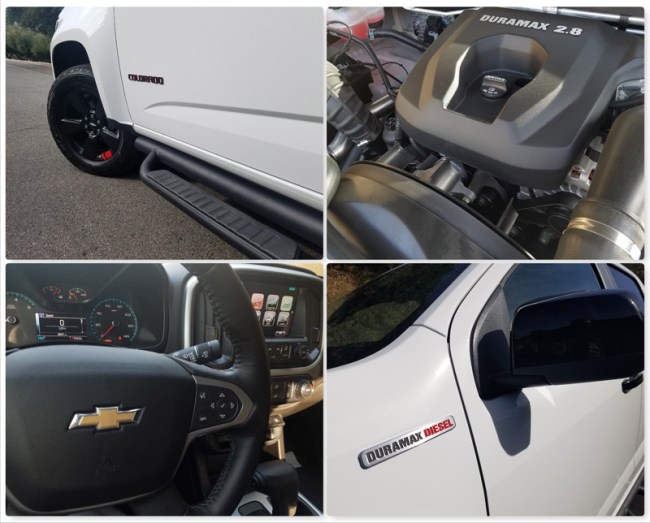 Inside, the Colorado Redline, which starts at roughly $30,000, stays pretty true to Chevy’s traditional trim offerings.

Of course, the heart and soul of the Colorado’s deeper appeal lies in how ruggedly solid the truck feels on the road, and the sense of confidence it gives you behind the wheel, despite its smaller size. The Colorado also stacks up pretty solid to larger trucks when it comes to heavy hauling, with a towing capacity of up to 7,700 lbs.

Our most recent Colorado Redline test model was powered by Chevy’s optional 4-cylinder turbo-diesel 2.8L Duramax engine, which cranks out 186-horsepower and a ballsy 369 lb.-ft. of torque, putting the pickup’s capabilities at the peak of those impressive towing numbers. 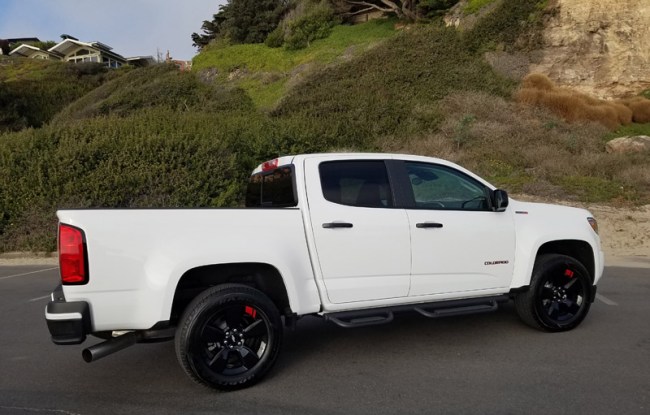 The Colorado Redline is also available with a 2.5L engine and a 3.6L V6 with 308 horsepower and 275 lb.-ft. of torque. The diesel-equipped model might have too much of a running growl for those who like a more, subtle sounding vehicles. But if you’re in need of a heftier hauler, that Duramax turbo-diesel engine, which is packed tightly under the hood, is music to one’s ears.

Still, the thing that really makes the Colorado Redline hot is how all those gritty truck elements have been accented with a few racing touches, which gives the compact pickup more presence on the road.