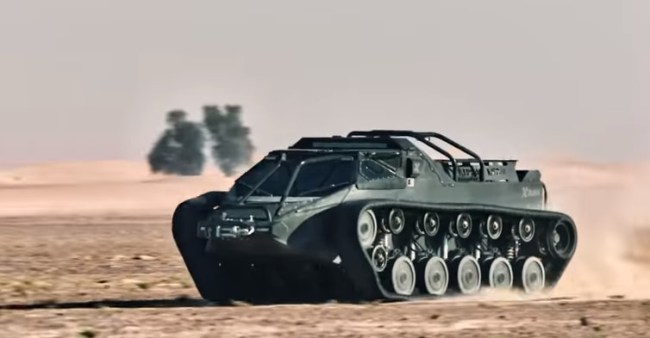 Do you want the all-terrain capabilities of a tank, but also want the mindblowing performance of a supercar? Why not both!?!?! The incredible Ripsaw EV2 is a high-performance luxury super tank that packs a punch with 700 horsepower at your disposal to zoom anywhere you want to go. Howe and Howe Technologies has brought the world the EV2, which stands for Extreme Vehicle 2. Now you can have a high-performance personal tank, which is the ultimate vehicle for the zombie apocalypse.

Richard Hammond, from Amazon’s car TV show The Grand Tour, recently got to go behind the wheel of one of these impressive super tanks and he was blown away. He was impressed not only by the speed and flexibility of the EV2, but rather the amazing suspension in the luxury tank. While most tanks will have you bouncing all over the place, the EV2 has a sophisticated suspension that keeps the cockpit stable no matter what terrain you’re driving over.

The EV2 boasts a massive 6.6-liter V8 that produces 700-HP that allows this super tank to go from 0 to 62 mph in a neck-snapping 3.2 seconds. That’s faster than Lamborghini’s lightning-quick URUS SUV which goes 0–60 mph in 3.6 seconds. Ripsaw was originally designed to be a super fast and lightweight military tank, but now you can get one as your second vehicle. However, having an all-terrain rocket tank comes at an exorbitant price. The Ripsaw EV2 costs $400,000, but when the zombie apocalypse arrives and we live in a Mad Max-esque existence, it will be worth its weight in gold.