#Affiliate Partner
BroBible may earn a commission if you buy a product or service via links in this article.
by Paul SaccaApril 28, 2018 11:38 pm 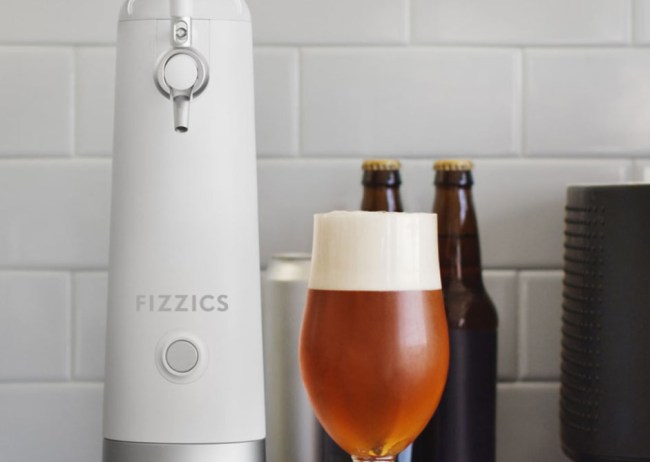 You love draft beer, but you don’t want to spend as much as $5,000 for a kegerator or refrigeration unit or as much as $12,000 for a 12-tap system. But bottled or canned beer just doesn’t taste as fresh as a heavy-headed draft brew, so what do you do? There is an inexpensive alternative to get a bubbly and frothy head. Introducing the Fizzics Waytap.

You may have heard of Fizzics Waytap before because the beer-enhancer was pitched on Shark Tank, where co-founders Philip Petracca and David McDonald were able to raise $2 million from Mark Cuban and Lori Greiner. But the product didn’t stop with the entrepreneurial TV show, Fizzics continued to become a success story.

The Fizzics Waytap system utilizes Micro-Foam technology by enriching the texture, taste, and aroma of cans and bottles of beer. While bottled and canned beers can lose their zest and carbonation, the Waytap brings them back to life and transforms the taste to nearly as vibrant as a draft beer from your local brewery.

You place a can, bottle, or growler of beer (up to a 64oz) inside the Fizzics Waytap. You pull the handle and your beer is revitalized and becomes much more effervescent. The beer is rejuvenated with a beautiful density and enhanced aroma thanks to the “sonication process.” Your old beer’s potential is untapped. The Fizzics Waytap is powered by AA batteries so that means it is portable, perfect for camping and tailgating. Plus it does not require CO2 or Nitro cartridges, so you can keep making a bubbly brew.

I tried out the Fizzics Waytap and it definitely made a difference and typically flat bottled beers were bubblier and had a far superior head without adding gases. The Fizzics Waytap doesn’t taste exactly like a draft beer, but the flavors (especially sweeter beers) are absolutely accented and density of a bottled beer was greatly enhanced. An added bonus is that the Fizzics Waytap comes in a stylish design and in several different colors such as white, black, copper, and slate grey. Plus it is easy to clean.

Right now the Fizzics Waytap is available for as low as $89.79, compared to a regular price of $129.99. So make your bottled beer better with a foamy heavenly head.