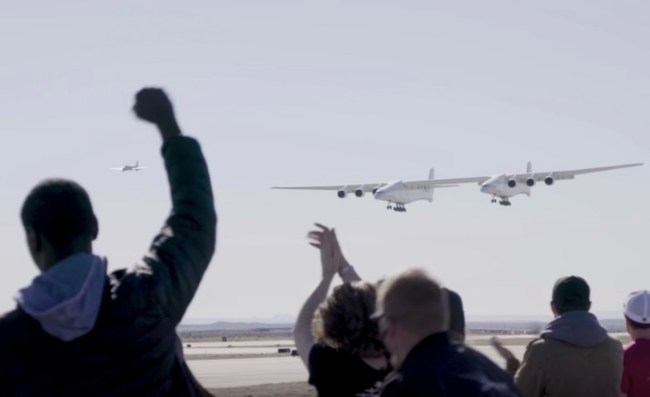 The world’s largest plane, Stratolaunch, made its first flight this past weekend. This enormous plane weighs in at 500,000-pounds and has a wingspan of 385-feet.

The Stratolaunch doesn’t look like your typical plane. It has a duel-fuselage build which was designed to help the Stratolaunch fly rockets into the atmosphere. Once it’s up to full capacity, the Stratolaunch will be a rocket-launching device and will fly at a peak altitude of 35,000-feet.

This weekend’s maiden voyage was a resounding success. The Stratolaunch flew for just over two overs (150 minutes) reaching a maximum speed of 175MPH and an altitude of 15,000 feet. This was all great news for the Strato’s first flight and when you see this thing in action you’ll realize just how insane it is:

It’s hard to really appreciate just how MASSIVE the world’s largest plane is when you see it flying, you need to look at it sitting on the tarmac next to stationery items so you can compare it to things you already know. Look at the size of this plane compared to that fuel tanker in the background off the right wing:

The people standing in-between the fuselages are barely a blip on the radar of this photograph:

It completely dwarfs that other plane in the background:

According to The Verge, Strato launch laid off 50 employees just a few months ago and scrapped plans to develop their own rockets. So there was a lot of uncertainty surrounding the launch of the world’s largest plane after those red flags went up.

“It was an emotional moment for me, personally, to watch this majestic bird take flight,” said Stratolaunch CEO Jean Floyd. The aircraft performed as expected, reaching a maximum speed of 175 miles per hour and a peak altitude of 15,000 feet.

“The flight itself was smooth, which is exactly what you want a first flight to be,” said test pilot Evan Thomas. During the first phase of the flight, Stratolaunch tested the airplane’s handling qualities. “It flew very much like we had simulated and like we predicted,” he said. According to Stratolaunch, the plane’s systems “ran like a watch” and that the aircraft landed “on the mark” after a few low passes. (via)

I realized yesterday when I was having a conversation with a relative that I never take notice of which model plane I’m flying on when traveling. But I’m also simultaneously always interested whenever someone hits me with some facts about the model of plane I’m flying on so I came to the conclusion that I just need to start paying more attention in the world. Do you guys ever pay attention to the model of plane you’re riding on? Am I crazy for never thinking twice about it until someone starts talking about it?