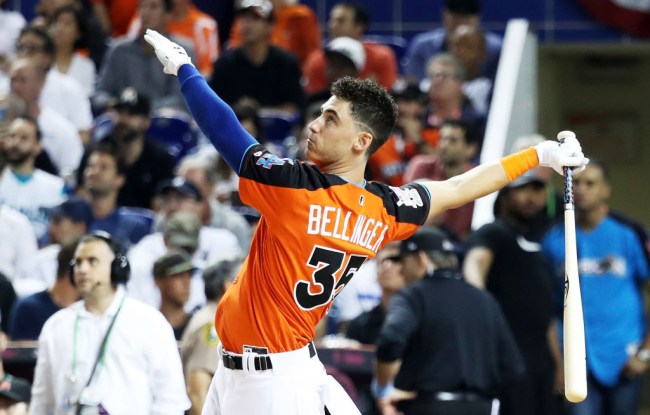 But clearly the real winner of the event was the mom of budding 21-year-old Dodgers star Cody Bellinger, Jennifer Bellinger.

It appears our cameraman is thirsty for Mrs. Bellinger pic.twitter.com/nsrNmL3obs

Oh sure, Judge may have launched a ball off the roof of the the Marlins’ stadium…

Aaron Judge hits the roof with a ball at Marlins Park.#HomeRunDerby #AllRise pic.twitter.com/NwjN5jEjLf

But thanks to this being 2017 where the world of social media rules I’d have to say that Jennifer Bellinger might have had an even better night than Judge did. That’s assuming that she doesn’t mind being called Ann Coulter’s doppelganger, that is. (Which, let’s be honest, she actually might. It is entirely plausible.)

How has no one reported on Ann Coulter being Cody Bellinger's mom?! #Dodgers #HRDerby2017 #FoxNews #GOP pic.twitter.com/rilKMpznKn

I'm not the only one who thought Cody Bellinger's mom was Ann Coulter when they showed her on TV right?

Dear Cody Bellinger, your mom might want to die her hair or something… #HomeRunDerby2017 pic.twitter.com/nNKwQoc8jo

i could easily jus google it but with todays fake news i jus want to cut straight to the source. are you cody bellinger's mom? @AnnCoulter

I really like @Cody_Bellinger as a player, but can't stand his mom @AnnCoulter

@Cody_Bellinger your mom is getting more attention than you! What the heck?? #Dodgers #MLB pic.twitter.com/c8GrZtWxwd

Cody Bellinger's mom could get it #HomeRunDerby

I had nothing against Cody Bellinger until I found out his mom is Ann Coulter.

So yeah, enjoy your 15 minutes of internet fame, Mrs. Bellinger. You, uh, earned it?