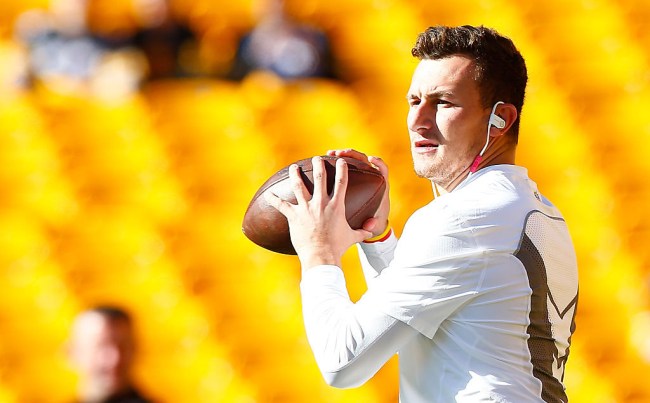 Johnny Manziel can’t stay out of the news even if when he’s not doing anything bad. According to TMZ Sports, Johnny’s fiancee Bre Tiesi is being accused by her ex-boyfriend of embezzling $1.3 million from him.

Before Bre Tiesi said “yes” to Johnny Manziel … she was engaged to another man — and the backstory involves everything from money to diamonds to the FBI.
Bre’s ex-fiance is Chris Anzalone — who was a BALLER in Southern California until he was arrested and convicted for running a $16 million investment fraud scheme.

But before he was sentenced to 15 years in federal prison, Anzalone showered Bre in riches — including cars, designer purses, Rolex watches and a 10-carat diamond engagement ring.

Their relationship went sour when Chris was locked up — and Anzalone claims Bre embezzled more than $1.3 MILLION in cash and expensive property.
Chris has lawyered up and demanded his stuff back — but there’s one problem … Bre says he’s lying and she doesn’t have it anymore.
TMZ Sports spoke with Bre’s attorney who says Tiesi met with FBI agents and surrendered every item she was asked to give up … items the feds claim she received from Anzalone’s ill-gotten fortune.

Bre says none of it was embezzled — everything she had was given to her as a gift.

Bre’s attorneys say Anzalone also accused Tiesi of letting Manziel propose to her with the ring HE used back in the day. But Bre’s team provided receipts showing Johnny’s ring was purchased in February.

While Bre has denied the allegations it’s clear that she’s into bad boys.