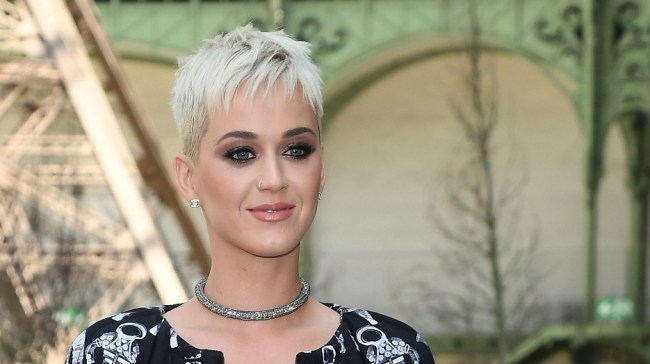 Katy Perry has been on quite a roll lately dropping truth bombs all over the place about dating, sex and relationships as she gears up for her big concert tour. She ranked her exes Orlando Bloom, John Mayer and Diplo on how good they were in bed (to which both Diplo and John Mayer responded), she discussed THOSE pics of her and Orlando Bloom paddle boarding, and now she’s dropped even more “keeping it 100” knowledge in a new interview for W magazine.

In the interview Perry says that, for the most part, she gets her ideas for songs three different ways: Transcendental Meditation, during a massage or while showering.

No. I make up songs. Or I go, “I like to move it, move it.” I’ve had several sing-offs with boyfriends. That’s very fun — singing in the shower and scrubbing!

So she’s into singing in the shower and scrubbing with her boyfriends. Hang on while I jot that down. Okay…back!

As for whether she’s digging her new short haircut, yeah, she is, bros…

Everything is more fun with short hair! I can just get up and go. I feel so liberated with this hair now. In general, I feel 360-degrees liberated — all around. Whether it’s politically, mentally, spiritually, sexually. I feel liberated from all the things that don’t serve me.

My first French kiss was in sixth grade in Big Bear, California. I was hanging out with this girl from church who had a bit of a reputation. She had a coed party, and I was not allowed to go to a coed party until eighth grade. But I went anyway. At the party, we played spin the bottle. It got to be my turn, and I spun the bottle, and, all of a sudden, I felt like there was a wet fish in my mouth. That was my first kiss. When you’re in sixth grade, there’s no art to French kissing. There’s no cadence, no beautiful up and down, no waves. Instead, it just feels like your mouth is getting invaded by a slug.

“I felt like there was a wet fish in my mouth,” and “it just feels like your mouth is getting invaded by a slug.”

That is not at ALL how I remember my first French kiss. I thought I had died and gone to Heaven. Perhaps she just had the wrong kissing partner. DM me, Katy.

Oh yeah, here are some pics, a video and a kind of creepy/sexy video/GIF thing that also accompanied the interview…