Mila Kunis Did Her First Photo Shoot In Forever, Refuses To Give Her Kids Christmas Presents 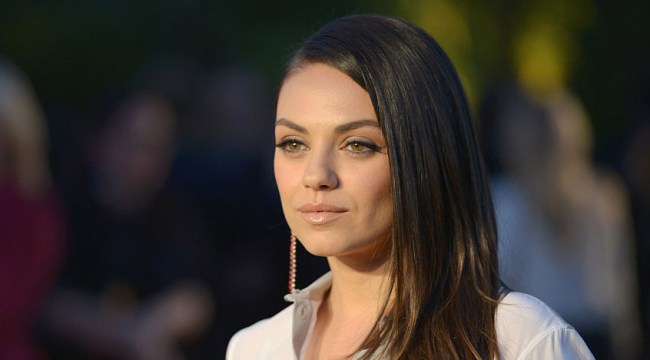 Remember what a big star Mila Kunis used to be? Four years ago, when she was at the height of her powers following Black Swan, Friends With Benefits, Ted, and Oz the Great and Powerful, Kunis was voted the sexiest woman in the world by not one, but TWO men’s magazines.

Then she got engaged to Ashton Kutcher, her former That 70s Show co-star (who was only a minuscule step up from her previous love, Macaulay Culkin, in my eyes) in February 2014. Then she gave birth to a daughter in October 2014. Then she married Kutcher in July 2015. And then she had a son in November 2016.

So yeah, she’s been pretty busy. Which is why she’s only been mentioned twice on this web site since 2015.

However! With the release of her movie Bad Moms last year and the upcoming release of the film’s sequel, A Bad Moms Christmas, coming out on November 1, 2017, Kunis appears to be slowly making her way back.

Which, as we all know if you’ve been following me for any length of time, means that she’s got to get on out there and drum up some publicity. Which, in turn means doing things like photo shoots and interviews.

Well, lookee here! Kunis did a photo shoot, and she also did an interview!

In the interview with Entertainment Tonight, Kunis dropped some knowledge on the very unusual way she and Kutcher do Christmas with their kids…

“So far, our tradition is no presents for the kids,” she says. “We’re instituting it this year because when the kids are [younger than] one, it doesn’t really matter. Last year when we celebrated Christmas, Wyatt was two and it was too much. We didn’t give her anything — it was the grandparents. The kid no longer appreciates the one gift. They don’t even know what they’re expecting; they’re just expecting stuff.”

“We’ve told our parents, ‘We’re begging you — if you have to give her something, pick one gift. Otherwise, we’d like to take a charitable donation, to the Children’s Hospital or a pet [or] whatever you want.’ That’s our new tradition.”

That…sounds…ummm…fun for the kids. Right?

As for the photo shoot, one of few she’s done in years, it was Marie Claire where she shared, among other things, how she views the current political landscape (as if it really affects her)…

“I have hope for the future. None of this is permanent, this is a phase…and we will come out of it as a country.”

Here are the pictures…

And a pretty darn good video…

Good to have you back, Mila.