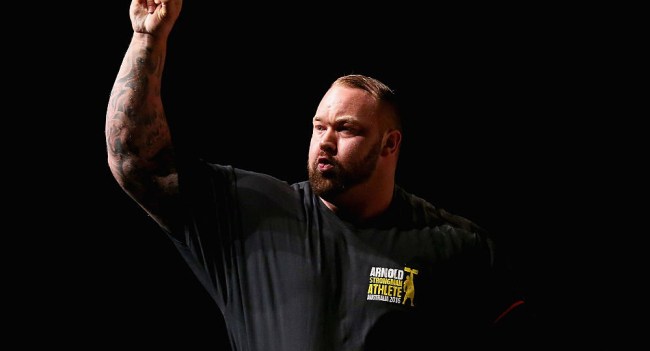 Hafþór Júlíus Björnsson (Hafthor Julius Bjornsson, when written in English, but you can just call him Thor) is best known by another name: Ser Gregor “The Mountain” Clegane from the HBO series Game of Thrones. The 6-foot-9, 400 pound actor is also well-known for his feats of ridiculous strength which has won him a couple of dozen Strongman titles.

His new girlfriend, Kelsey Henson, which Thor met while in Canada doing the Strongman thing, is a teeny-tiny 5-foot-2 and looks like she weighs less than a third of what “The Mountain” does. She can probably fit her whole body into just one of his pant legs.

Her Instagram profile says she is or has been studying Occupational Health & Safety at the U of A, which I am pretty sure in Canada means the University of Alberta. Also based in her Instagram, she seems like a natural fit for Thor, despite her small stature, because it is quite obvious that she loves to work out.

Hafthor Julius Bjornsson is dating Kelsey Henson from Canada. We’re told the 6’9″ actor hit it off with Kelsey — who’s 5’2″ — in September when she asked for a pic with him at Earls Kitchen + Bar in Alberta. She was working there, and Thor was in town for a Strongman competition.

Apparently, since the two met they have been doing a lot traveling of traveling together visiting Spain, Cyprus and his homeland of Iceland where he was that country’s “Strongest Man” every year from 2011 to 2017. (He finished in 2nd in 2010. So lame.)

Hanson shared some pics of their recent adventures and it sure looks to me like they seem to make a pretty darn good couple. (Swipe on the first pic to see them all.)

🇮🇸🇮🇸🇮🇸 I had the greatest time in Iceland this past week, met some awesome people and had some great experiences! Thank you to @thorbjornsson for having me and introducing me to Iceland 🙌🏻😘. As well as @vikingtrips for the tour! Any of my friends travelling to Iceland, I highly recommend Viking Trips if you want to tour around Iceland!! . . #weekendvibes #getaway #Iceland #kopavogur #reykjavik #trip #tour #vikingtrips #goldencircle #geysir #waterfall #axeriver #falls #winter #ice #snow #beautiful #blonde #exploreeurope #mondayfunday #travel #goodvibes #goodtimes #keepwarm #misshim #babe #instatravel #instagood #instadaily #picoftheday

Right now they are still in the long-distance phase of their relationship, but she reportedly has plans to visit the big man again in January. Where it goes from there? I guess, much like with Game of Thrones, we will just have to wait and see.