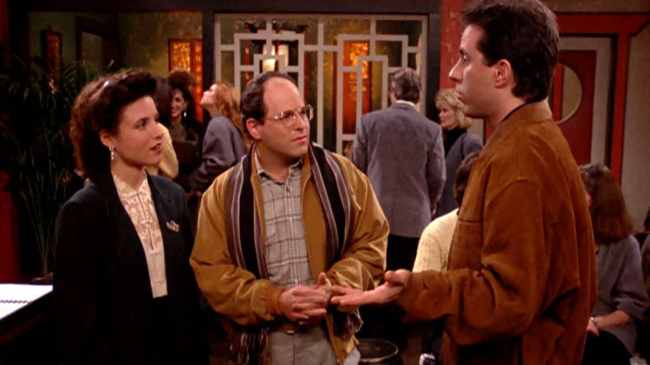 Best sitcom of all time, better than Friends, epitome of the 1990s, Jerry Seinfeld, Larry David, blah, blah, blah, yadda, yadda, yadda. It’s hard to say much about Seinfeld that hasn’t been said a million times before.

With that said, people who’ve seen every episode multiple times and can’t go more than a day without quoting the show after encountering some situation where it’s applicable may not know as much as they think—including these facts that might surprise you.

14. Festivus was Not a Seinfeld Creation

The fake holiday was actually created in 1966 by a Reader’s Digest editor who came up with it to celebrate the anniversary of the first date with his wife. That editor’s son became a writer for Seinfeld, bringing the idea to the show.

13. Newman Doesn’t Have a First Name

Unlike Kramer—who we know sports the first name “Cosmo”—Newman doesn’t have one at all. And before you say “Noooo, in the Episode “The Bottle Deposit, Part 2,” the farmer’s daughter calls him “Norman,” that was actually the actor’s mistake, misreading “Newman” for “Norman” in the script.

In fact, in the episode “The Package” the record is set straight as we see Newman’s business card which simply reads, “NEWMAN.”

11. Kramer’s Entrances Cause the Studio Audience to Clap Way Too Much

Kramer was very much a gateway drug for those who were skeptical of Seinfeld. At one point, the character became so popular that the show’s directors had to ask the studio audience to stop clapping for so long because it was affecting the pacing of his scenes.

Though Larry David’s most famous role in Seinfeld was providing the voice for the Yankees owner George Steinbrenner, he also voiced an MTA subway announcer, a boxing referee, a soap opera director, Saddam Hussein, and the line, “Is anyone here a marine biologist?” in the episode “The Marine Biologist.”

9. Seinfeld Got the Most Emmy Nominations, Ever

Seinfeld was nominated for 68 Emmy awards and won 10. It should have won 68.

Holy DIVER! Larry David got $250 million upon the show’s end in 1998 from this mammoth syndication deal with payments to be made until the full $1.7 billion is reached.

7. The Series’ First and Last Conversations Were About the Same Topic

The series began its pilot episode and ended its series finale with a conversation about a shirt button.

6. NBC Made Serious Bank Thanks To ‘Seinfeld’

Seinfeld generated around $200 million in profits for NBC every year it was on.

5. Seinfeld Was Originally Supposed to Be a Documentary

Jerry Seinfeld had never intended to do a sitcom. He had meant to do a 90-minute TV documentary called “Stand-Up” in which he shows the process behind building and executing his routines.

Execs at NBC saw the footage and thought it could be the basis for a sitcom instead. In 2002, after Seinfeld ran its course, Seinfeld went back and made his documentary under the title, “Comedian.”

4. Other Well-Known Actors Auditioned for the Role of George Costanza

Nathan Lane, Steve Buscemi, and David Alan Grier all read for the part.

3. Other Well-Known Actors Auditioned for the Role of Elaine Benes

These include Rosie O’Donnell, Megan Mullally, and Patricia Heaton.

1. Most of Seinfeld Wasn’t Actually Filmed in Manhattan

Although Seinfeld was set in the Upper West Side, a great deal of it was shot in New York City’s arch-nemesis, Los Angeles.