Hell Yeah, A Brewery In Finland Is Making 1000-Packs Of Beer So The Party Never Stops 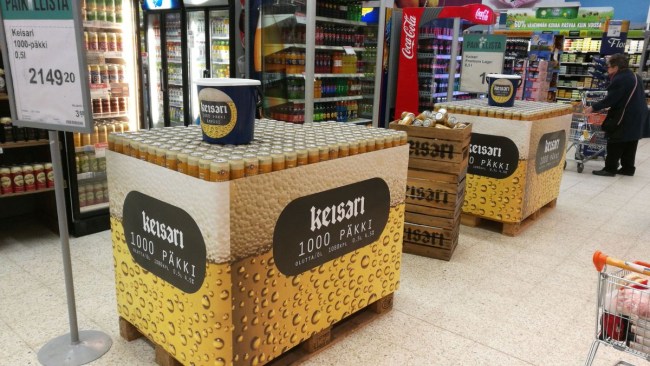 I’m a big fan of bulk can beer. Nothing better than a couple racks of Costco Kirkland Signature for dirt-cheap prices. Or any cheap 30-pack of cold domestic brew for a party. Unfortunately we don’t have 1000-packs yet in America, but a brewery in Finland called Keisari is leading the charge. It’s basically a pallet of beer, which is something that Costco needs to do ASAP. 4

According to Grub Street, it costs a little over $500 for all those delicious beers.

A pack will set you back about €2,150, which is north of two bucks per beer. And you do get something of a bulk discount: To hit a thousand, Keisari had to package five stacks of rows that are 12 beers wide by 18 beers long — for a total of 1,080 cans. That’s an absurd amount of beer, of course, so K-supermarket says it’s going to start breaking pallets that don’t sell by today into more manageably sized packs. You can still, in theory, buy 1,000 beers that way, but somehow the whole endeavor would seem just a little less thrilling.