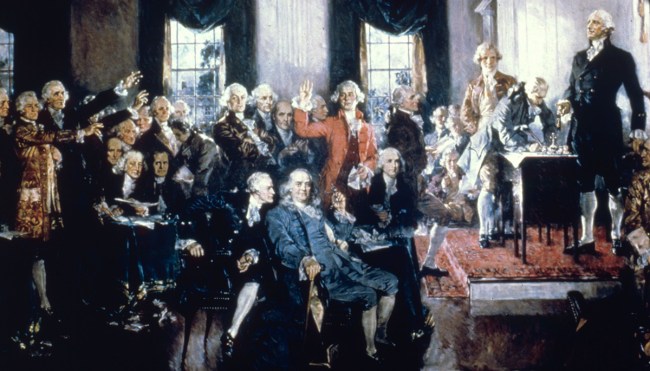 Late last night, I was browsing the web while trying (in vain) to fall asleep I came across an old article questioning whether or not the Founding Fathers of America were full-blown alcoholics.

I ended up on that article after reading up on how much the Founding Fathers despised each other; like, these bros couldn’t stand the sight of one another and it’s a goddamn miracle our country ever came to be, that’s how much they hated one another.

However, they were ultimately able to put their differences aside and establish the principles that serve as the foundation for the United States of America. That includes the framework established in the Constitution, the document whose signing was responsible for bringing the eye-opening drinking habits of the Founding Fathers to my attention.

How do we know the founding fathers as a group drank a lot? Well, for one thing, we have records of their imbibing. In 1787, two days before they signed off on the Constitution, the 55 delegates to the Constitutional Convention partied at a tavern. According to the bill preserved from the evening, they drank 54 bottles of Madeira, 60 bottles of claret, eight of whiskey, 22 of porter, eight of hard cider, 12 of beer and seven bowls of alcoholic punch.

That’s more than two bottles of fruit of the vine, plus a few shots and a lot of punch and beer, for every delegate. Clearly, that’s humanly impossible. Except, you see, across the country during the Colonial era, the average American consumed many times as much beverage alcohol as contemporary Americans do. Getting drunk – but not losing control – was simply socially accepted.

That is, simply put, a ton of hooch; that’s more booze than any NFL team could drink in a week.

If you’re not familiar with Madeira, it’s a sweet wine similar to Port and one of my favorite after-dinner drinks. It was immensely popular in the colonial era, but the fact that they were able to go through 54 bottles of the stuff is staggering.

That’s basically one per person—and there’s before you get to the 60 bottles of Claret (another strong wine that’s much like a Bordeaux ), which is over one bottle per person on top of the other types of alcohol that got thrown into the mix.

I’m not willing to call anyone an alcoholic based on one night of drinking, but that’s a seriously impressive bar tab. Well done, Founding Fathers. Well done.