What Happens When Two Players On the Same Team Make the Same Cup In Beer Pong? 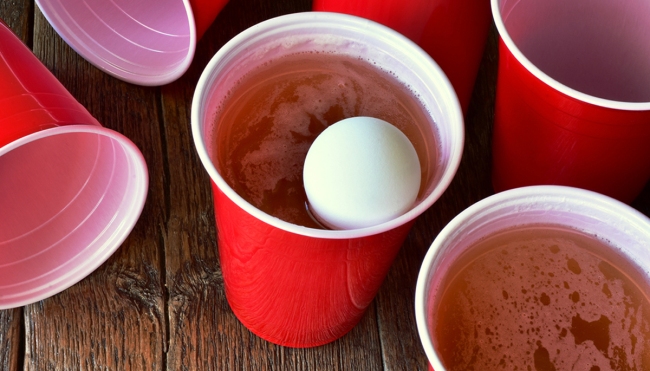 Beer pong (or, depending on where you hail from, “Beirut”) is one of the most popular drinking games on the planet.

The beloved pastime is based on a fairly well-established set of rules, but anyone who’s played it regularly has likely encountered more than a few different arguments over the various “house rules” that can throw a wrench into things.

Those regulations can apply to a number of different facets of the game, especially when it comes to certain penalties players can incur when they encounter some relatively uncommon situations.

That includes the one at the center of the reader email we received from someone in search of some clarification on what to do if two players on the same team both manage to hit the same cup in the same round:

“I write to you today to help me and my bros solve a pressing problem. I’m a law student, and I live in a house with five other guys. This is not the frattiest collection of people you could find, but it’ll do.

We’ve decided to host a beer pong tournament, and because we’re law students, someone decided that we needed to write down all the rules prior to the tournament. One person volunteered, and when they finished chaos ensued.

We’ve managed to fix most of the dumb-ass rules this guy came up with, but one is still a point of tension, and this is where we could use your help.

The problem is this: What happens when the two players on the same team make the same cup in the same turn?

The two options are:

Some compromises were proposed, but those have been rejected. My friend proposed that pulling cups be allowed, but making the same cup is rewarded with only three (3) cups being removed. I rejected this because it sounds like someone with a loser’s mentality would come up with.

I then proposed that pulling be allowed, but the same cup results in seven (7) cups being removed. This was rejected because it was “arbitrary,” as if the rest of this discussion was not already arbitrary.

So we’ve got these two options, but cannot agree on the right one. We checked the World Series of Beer Pong, but they don’t allow you to make the same cup, and we all agree that is stupid.

Since we can’t resolve this any other way, I figured we would turn to you guys, as you have access to the largest collection of beer pong-playing experts in the world. I was hoping you guys could throw up a poll or something on the site, and help us solve this incredibly profound problem.”

So these dudes clearly came our way for an objective opinion on the matter, and while we’re hesitant to dub ourselves the ultimate authority on the matter, the collective of beer pong veterans at BroBible didn’t need long to come to a consensus.

Our verdict? A cup should always be pulled immediately after it’s hit, and if the second player makes the same cup before (or even while) you pull it away, it’s officially GAME OVER. Pack your bags and go suck at life elsewhere because this table ain’t yours NO MO.

The tribe has spoken.