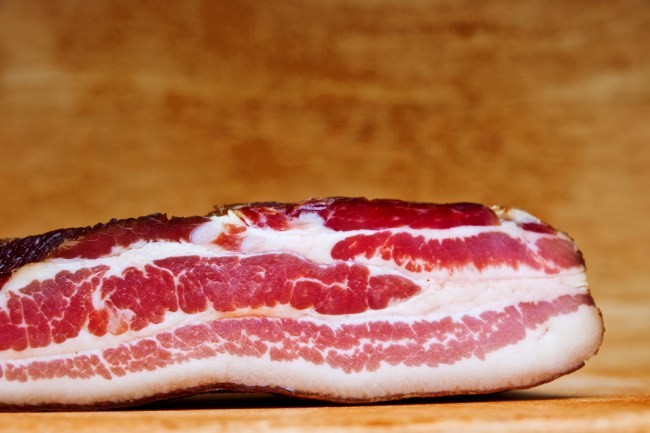 Saying that you’re obsessed with bacon is like admitting you survive by breathing air and drinking water. We’re ALL obsessed with bacon, in the same way that everyone on planet earth loves pizza and thinks Scarlett Johansson is attractive. But, just because we all go nuts for bacon it doesn’t mean that we’re out there trying to find the single best bacon in America, that job is for the experts.

Who are the experts? The editorial team behind ExtraCrispy.com, a Time Inc property devoted to all things bacon. Their in-house bacon critic (yup, just another fuckin’ job my H.S. guidance counselor never told me about!) named the best bacons in America as well as the worst bacon in the country.

The #1 bacon in America comes from the Vande Rose Farm in Iowa, but before we look at that bacon let’s check out how the full list of America’s best bacons looks. You can find out more information on any of the bacons listed below by following the link (via ExtraCrispy):

The bacon which was named the ‘Best Bacon in America’ is the Vande Rose Farms Applewood-Smoked Artisan Dry-Cured Bacon. To see which bacons landed in the #4-#2 slots you can follow that link, but before you do, here’s what the ExtraCrispy bacon critic had to say about the Vande Rose Farms bacon:

You can immediately sense all of this attention to detail upon taking a bite of this stuff. Whether you fry it in a skillet or bake it in the oven, one taste will make your eyes reflexively close as you take a deep sigh of amazement and appreciation and think, “Now THIS is bacon.” The applewood smoke rides nicely in the background as the cure and pork take over. As will Bill-E’s, Vande Rose is a sublimely balanced product, with no single aspect never overtaking another. They all work in harmony, an orchestra of flavors and textures that make this bacon nothing short of brilliant. If you think I’m waxing rhapsodic, you’re right. I am. But trust me, try this bacon and you’ll realize why.

If that doesn’t sound like a little slice of heaven then I don’t know what does. I recently got back on the bacon train myself, and spend 24 hours cooking sous vide bacon 7 days ago:

24-hour cooked bacon using the sous vide Joule from @ChefSteps…forgot to take pics before I started eating, apologies for the sloppy photo pic.twitter.com/r23RdbMOZ2

It came out great, but if I were to slow cook sous vide bacon again I think I’d only throw it in for 8-12 hours. 24 hours seemed a bit like overkill because the bacon’s done after 8 hours and while it continues to become juicier the longer you cook it I think the anticipation of waiting 24 hours for bacon all but ensures you’re going to be let down….If I had to name my personal favorite bacon it’s going to be Nueske’s Applewood Smoked Bacon all day every day…What about you bros, what’s your favorite?

Now, if you want to see the full review on America’s best bacons just CLICK HERE.