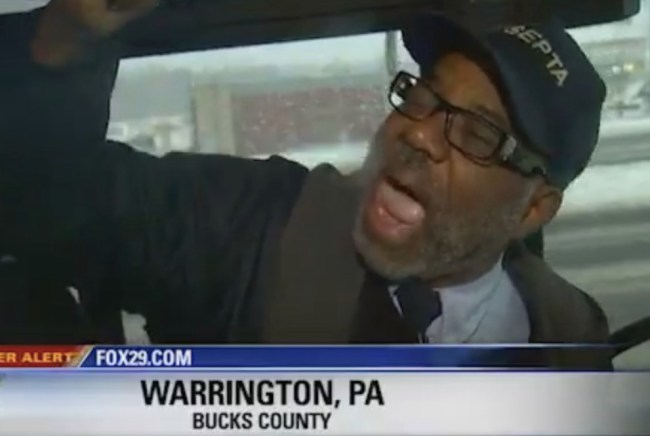 Philly’s Local FOX 29 news stopped this bus driver to ask him about driving around in yesterday’s blizzard conditions but the interview went off the rails pretty quickly. Either the man forgot he was on live TV or he simply DGAF, but this driver lost his shit when someone tried to sneak onto the bus without paying their bus fare.

Perhaps the rider thought the driver would be distracted by the TV interview and assumed he wasn’t paying attention. Or maybe they just wanted to see what they could get way with. But this man went from Zero-to-Philly in an instant.

Technically, this didn’t go down in Philly. It actually took place in Bucks County outside of the city, sort of equidistant between Philly and Trenton. But that doesn’t make this man’s reaction any less Philly, does it?

Something about this video actually makes me miss living in the Northeast. I’m down in Florida now, the state where I was born and raised, but I was living in NYC for the previous 9 years and the type of crazy person you encounter in Florida is VERY FUCKING DIFFERENT than the crazy you get in NYC. I don’t miss those days of getting on the subway to find a homeless man with his pants around his ankles and piss all over the seats, but I do kind of miss the random bodega clerk flipping shit for no reasons, that sort of crazy keeps you on your toes.