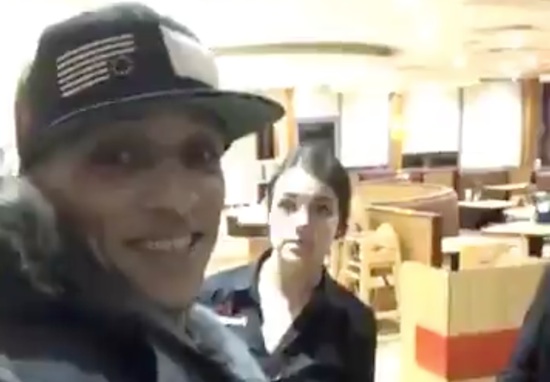 When I was 17-years-old, my friend Mike worked at a Pizza Hut in New Jersey. Mike told me a story of how he showed up at work early one day and caught a manager having sex. Mike alleges that his manager was having sex with the pizza dough. The manager allegedly molded a luscious pizza dough vagina and was thrusting his sad penis into it. That’s probably a great way to get a yeast infection. Mike said he did not confront his manager, just walked out. It turns out that catching your boss making love to the food you prepare for customers can put a major strain on the working relationship. The manager’s love for pizza dough forced Mike to quit a week later because he couldn’t look his manager in the eye after the dough-fucking incident. This was many, many years ago, but this alleged encounter was the only Pizza Hut sex story that I had ever heard of. Until today.

This new story comes to us from the U.K., where a customer claims that he caught two Pizza Hut employees having sex in the back room of the restaurant. Ace Brown frequented a Pizza Hut location in Bristol, England around 10 p.m. in hopes of getting some grub. Instead, he went away unsatisfied, much like the two employees who were interrupted.

There were no employees at the front counter of the pizza purveyor, so Ace shouted and nobody answered. Ace is a considerate gent, so he went into the back of the restaurant to see if everything was okay. He captured his manhunt on camera on uploaded it to Facebook. Brown continues to yell, to get the attention of any employees, but the joint seems deserted.

Ace peeks his head in a back room and finds two employees. Brown claims that the man and woman were having sex and the fella was “doing up his trousers.”

The female employee replies, “No we were not. We were doing the money.” Then she threatens, “You need to leave or I will call the police. We have security cameras.”

The video has gone viral with over 1.4 million views and shared over 20,000 times.

A spokeswoman for Pizza Hut commented on the situation:

“We are aware of this video and can confirm that there is absolutely no truth in the allegations made in the film regarding our team members. We can confirm that after our Bristol restaurant closed last night the team were in the process of locking up when a member of the public entered the Hut. The individual made his way through the hut to where employees were closing up the restaurant and was subsequently escorted off the premises.”