Donald J. Trump Is Officially Your President Of The United States – Here Is His Inauguration Speech

Donald J. Trump was sworn in as the 45th president of the United States. In front of a massive crowd in Washington D.C., Trump raised his right hand and put his left on a Bible used by Abraham Lincoln and repeated a 35-word oath of office from the U.S. Constitution, with U.S. Chief Justice John Roberts presiding. The peaceful transition of power from a Democratic president to a Republican president took place on the West Front of the U.S. Capitol before a troupe of former presidents, dignitaries and hundreds of thousands of people on the grounds of the National Mall.

In his 16-minute inauguration speech, Trump declared he will lead with “America First” policies and declared that “now arrives the hour of action.”

“The forgotten men and women of our country will be forgotten no longer,” Trump said in his inaugural address.

Trump said he planned to “transfer power from Washington, D.C.” and give it “back to you, the people.”

Trump promised a united country for all races.

“Whether we are black or brown or white, we all bleed the same red blood of patriots,” the newly elected President stated.

“When you open your heart to patriotism, there is no room for prejudice,” President Trump said. “When America is united, America is totally unstoppable.”

Pres. Donald Trump urges solidarity among Americans and vows to be president for all people: https://t.co/AsjUerEVmy #InaugurationDay pic.twitter.com/iJg7AWwtDD

This day “will be remembered as the day the people became the rulers,” President Trump said. 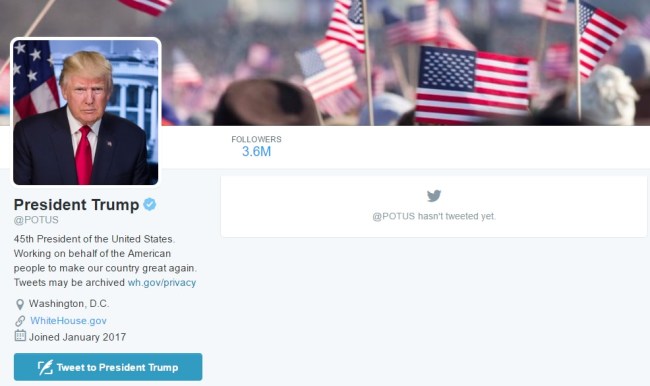