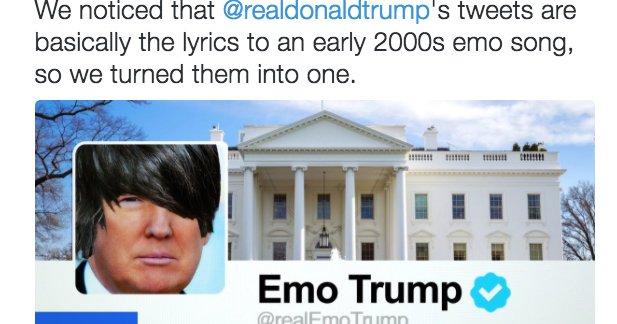 The 45th President of the United States, Donald Trump, is pretty unhinged on Twitter, where he randomly attacks his fellow billionaires and screams about “FAKE NEWS!” and other things that don’t go his way.

The geniuses at Super Deluxe noticed that this is the behavior of an early 2000s emo child. So they wrote song using just Donald Trump’s tweets that feels like every Taking Back Sunday/My Chemical Romance/Fall Out Boy song ever written.

We noticed that @realdonaldtrump's tweets are basically the lyrics to an early 2000s emo song, so we turned them into one. pic.twitter.com/WjquEHrreo