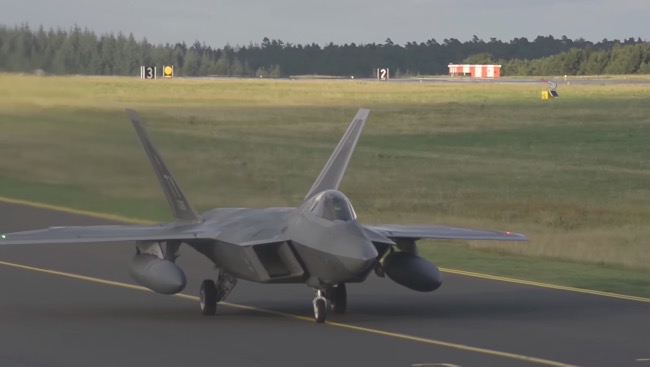 Top Gun 2 is definitely happening and Tom Cruise is on board (You can read about some of the main characters HERE). Let’s hope that they upgrade from the F-14 Tomcats (Which were retired from operational service in 2006) to the badass and state-of-the-art F-22 Raptor. If they use the F-22 Raptor they can perform insane gravity-defying stunts such as this inverted somersault.

This unbelievable low-speed manuever shows the United States Air Force fighter jet appears to come to a complete stop in mid-flight, flip, and turn the opposite direction all in one smooth motion. Let’s check out another F-22 Raptor perfectly perform a maneuver that would be a game-changer in a dogfight to get behind an enemy that is pursuing you. This is some UFO shit.

The F-22 Raptor, which can reach speeds more than Mach 1.5, features thrust vectoring that allows it to change directions at the drop of a dime. Thrust vectoring allows the fighter’s jets to be aimed in different directions to immediately alter the direction of the aircraft. At $339 million per plane, the Lockheed Martin F-22 Raptor had better do some seriously mind-melting things. Which is exactly why the F-22 Raptor needs to be in Top Gun 2 so they can turn and burn.