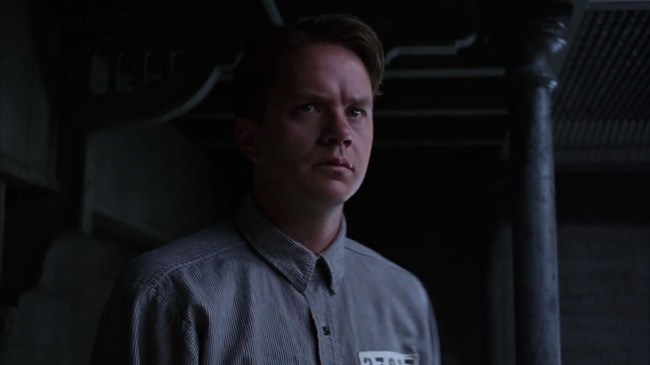 In a completely unofficial ranking of the most rewatchable movies ever, The Shawshank Redemption is firmly entrenched in the top five, if not in the top three. The 1994 film, based on Stephen King novella is in somewhat regular rotation on a handful of cable channels, no doubt helping its rewatchability rankings. In fact, it’s probably on right now and if it is, there’s a good chance of you getting sucked into the story of Andy Dufresne, played by Tim Robbins, and his quest to both prove his innocence and somehow escape from the Shawshank prison.

Spoiler: he does escape.

In both the movie and the novella, the prison holding Dufresne is set in Maine but in real life, the film was shot at The Ohio State Reformatory in Ohio. If you’re interested, you can take tours of the prison and see some of the filming locations that were used. You can even check out the tunnel that was used by Dufresne to escape, ideally minus all the excrement.

Oddly enough, there was once an inmate in The Ohio State Reformatory whose story somewhat resembles Dufresne’s. Let’s talk about Frank Freshwaters, shall we?

Who Is Frank Freshwaters?

Frank Freshwaters was born in 1936 in Akron, Ohio. On July 3, 1957, Freshwaters killed Eugene Flynt while driving. After pleading guilty to voluntary manslaughter, Freshwaters was sentenced to up to 20 years in prison. However, his sentence was soon suspended and he was put on probation for five years.

Probation didn’t last long for old Frank Freshwaters though. In 1959, after violating the terms of his parole, he was sentenced to 20 years and on February 19, 1959, was sent to The Ohio State Reformatory in Mansfield, Ohio, the prison that would eventually be known as the place where The Shawshank Redemption was filmed.

Much like Andy Dufresne did in The Shawshank Redemption, Freshwaters managed to get in good with the staff of the prison and was “quickly able to earn the trust of the prison officials,” according to Peter Elliott, the U.S. marshal for the Northern District of Ohio. How he did this isn’t known, but it probably wasn’t by helping them with their taxes. Who knows, maybe Freshwaters was a hell of a comedian? Or maybe they just liked his name. It is a great name, by the way. It sounds like the name of a bass player for a mid-tier jam band.

Anyway, after getting in good with the guards, Freshwaters was soon transferred to Sandusky Honor Farm in nearby Perkins Township, Ohio.

Whereas it took Dufresne some 20 years to dig himself out of Shawshank, Freshwaters escaped from the honor farm within months, mysteriously disappearing from the facility on September 30, 1959. How exactly Freshwaters escaped has never been divulged by authorities. My guess? Probably magic.

Life As The Shawshank Fugitive

After his escape from the honor farm, Freshwaters high-tailed it south to Florida, where he was able to get a social security card and began living life as William Harold Cox, a decidedly less cool name than Frank Freshwaters. Freshwaters/Cox then headed back north, setting up shop in Hurricane, West Virginia where he picked up work as a truck driver. In October 1975, a little over 16 years after his escape, Freshwaters was arrested by authorities in West Virginia’s Kanawha County.

However, Freshwaters wasn’t done for yet. Citing his clean record since escaping, the governor of West Virginia decided against extraditing Freshwaters back to Ohio. He was simply let go. But because Ohio was still looking for him, Freshwaters again went into hiding.

Yup, he went back to Florida. It’s always Florida.

The End Of The Road For Frank Freshwaters

Once in Florida, Freshwaters, again going by William Harold Cox, settled in Brevard County, where he lived with one of his sons. By 2015, he was living in a trailer and working as a caretaker for property owned by the parents of Thad Altman, a member of Florida’s House of Representatives.

In 2015, the U.S. Marshals Services set up a cold case unit and parole officials in Ohio asked for help tracking down Freshwaters. A few weeks of looking led them down to Florida where local law enforcement officials helped with the case. Eventually, they came face to face with Freshwaters and showed him a picture of himself, one taken at the time of his initial arrest, asking if they had seen the person in the photograph.

“He hadn’t seen him in a long time,” Freshwaters responded. Classic Freshwaters.

According to CBS, it was his fingerprints that finally did him in after over 50 years.

Marshals in Ohio had sought help from deputies there, and they created a ruse to get him to sign papers so they could check his fingerprints, which matched the decades-old arrest, said Major Tod Goodyear.

Freshwater was finally returned to Ohio but once again, his time behind bars was brief. On February 25, 2016, the Ohio Adult Parole Authority agreed to release Freshwaters. Freshwaters was released on June 15, 2016.