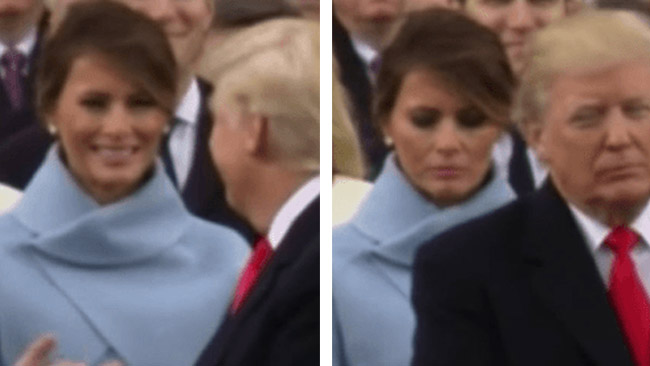 A clip of Donald Trump’s wife Melania Trump from the inauguration has gone viral as it shows her smiling at The Donald then immediately breaking into a scowl the moment his back is turned to her.

Now before you go and think that the clip has been altered here’s the full video (skip to 2:52:00)…

That video is not in reverse as some are claiming. Here’s a wider, longer version (h/t @LPDonovan) #FreeMelania pic.twitter.com/52zTjUSDUn

Of course, it all could mean nothing, but that isn’t stopping Twitter from doing what it does: having a little fun.

#FreeMelania Blink twice if you want us to save you. pic.twitter.com/1H5as3tbZq

🤣 somebody save her… #FreeMelania pic.twitter.com/46H0J6ztT0

When the divorced couple has to sit next to each other at their daughter's wedding reception. #freeMelania pic.twitter.com/Y92GSvWsnE

I do not think she is happy with her situation. #FreeMelania pic.twitter.com/ihzhNYBDfz

The more I read, the more I want to send a note to Melania telling her she can come hide in my apartment for 4yrs if she wants #freemelania

This whole #FreeMelania thing overlooks the very real possibility that she is his Russian intel groomer/handler.

Donald Trump was so excited to see the Obamas that he forgot his bride at the car. #SpicerFacts #obamasgrace #4yearsof #freeMelania pic.twitter.com/TM4LnqzE2B

The whole #FreeMelania thing is silly.

She clearly accepted the KGB's assignment as #DonaldTrump's wife willingly.

Someone inject tiny explosives in Kurt Russell's neck and tell him he has 24 hours to rescue Melanie from the White House.

There are millions of women all over the world who are in forced marriages and need help, but y'all saying #FreeMelania smh.

Valid point. It is funny though.