Girl’s Selfie Turns Into A Meme After Everyone Notices How Much Of A Slob She Is – Wait. Is That A Rat? 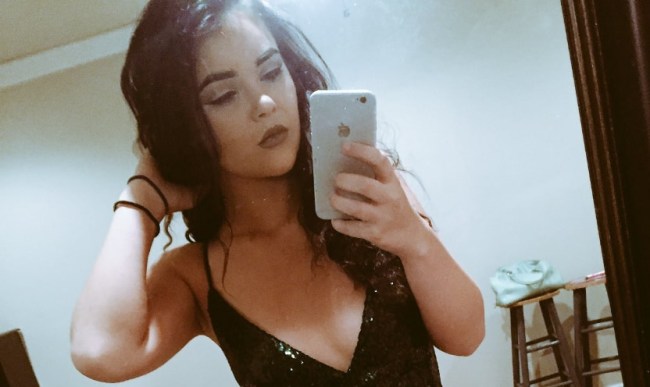 If you were to ask people to name what gender a slob would be, 8 times out of 10 people would say it would be a guy. It would be 10 out of 10 had guys not cleaned their places up to fool a girls into thinking that they are not a slovenly sluggard and hopefully have enough room to make romance. However, women are fucking bedraggled ragamuffins just as much as dudes. Take for instance this slobbess with one of the messiest rooms that I have ever laid eyes upon.

@og_pocahontas good lord look at that room. i pray for whoever marries you

Meet Alyssa from New Orleans. While she’s dressed splendidly for a night on the town (despite wearing brown shoes with a black sequin dress), her messy room suggests she’s ready to appear on “Hoarders.” Her slovenly selfie racked up nearly 4,000 RTs and over 7,000 Likes including many who commented on just how much of a fucking slob Alyssa is.

People noticed that there’s goddamn marshmallows on the floor.

@og_pocahontas And after dinner, she'll be eating floor marshmallows for dessert: pic.twitter.com/WxrAhZJHWf

Someone noticed a rat in the nasty room.

Do you want rats? Because leaving marshmallows on the floor is how you get rats.

Someone cleaned up Alyssa’s room for her through the magic of Photoshop.

*Fixed* RT @og_pocahontas: Going to dinner because I needed an excuse to wear this pic.twitter.com/dBzG0Jax0U

Alyssa claims that her room is “under construction.” Who’s in charge of the construction? A tornado?

On second thought, we would all beg Alyssa to messy up every room in our house.

What an optimal moment to post these beautiful pictures of me 💁🏻 pic.twitter.com/SINMidwtDP