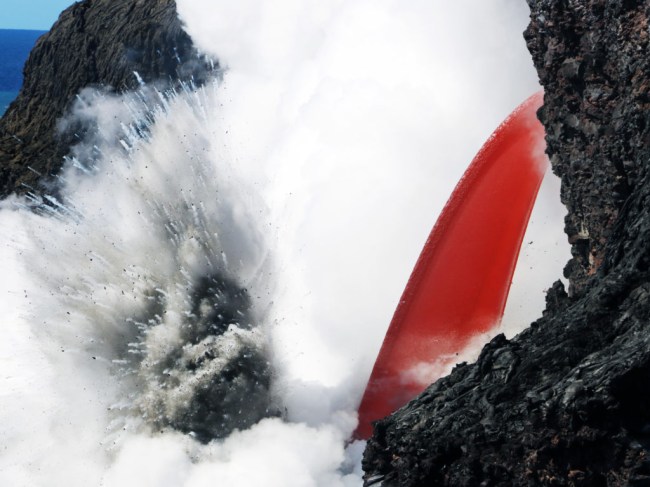 Hawaii is without a doubt is one of the most beautiful places on the entire planet. Even the destructive force of their volcanoes are spectacular. The world was treated to this savage magnificence this week when the Kilauea Volcano belched molten lava into the Pacific Ocean.

The Kamokuna ocean entry on the coastline of the Big Island of Hawaii expanded farther into the ocean when firehoses spewed lava into the ocean. The glorious display of nature’s fury was captured by the United States Geological Survey.

A crack has formed along the coastline near the ocean entry, and over the last few days it has continued to grow—complete with creaking and groaning at night as the block of lava moves. Most likely, this will become another piece of the island that will fall into the sea. USGS geologists from the Hawaii Volcano Observatory took some infrared heat measurements of the cracked lava bench and found that it reaches over 220ºC (428ºF) only a few meters below the surface.

The lava pours into the water at temperatures around 1200ºC causing explosions on impact.

Kilauea first erupted 34 years ago and remains to be active to this day. On New Year’s Eve, the volcano erupted and unleashed 21 acres of lava into the ocean.