Trippy Helicopter Footage Shows The Insane Amount Of Fireworks Shot Off In L.A. On The 4th 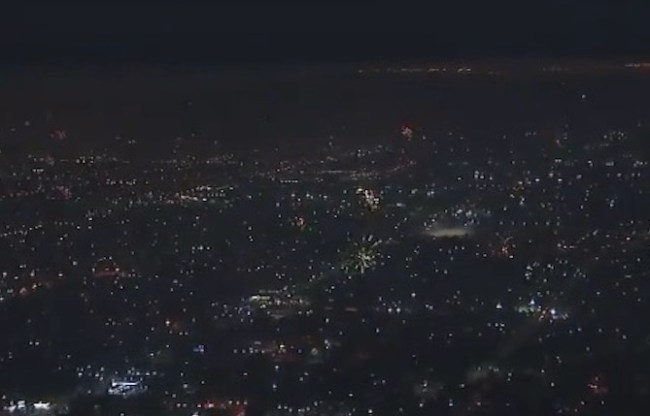 The ABC 7 news helicopter in Los Angeles captured some crazy footage last night of fireworks going off all across the city of angels. This isn’t some official city-sanctioned fireworks display. These are hundreds of homes all across the city firing thousands of exploding mortars into the air, and it’s pretty damn awesome:

AIR7 HD captured hundreds of fireworks going off all over Los Angeles. Be safe out there! pic.twitter.com/da36WHvEY2

Everyone seems to be a law-abiding citizen until the 4th of July rolls around. When it comes to shooting off fireworks, Americans DGAF about the local laws. We all feel that it’s our God Given Right to shoot explosives into the air after the sun sets on the fourth day of July.

Los Angeles has some pretty strict fireworks laws. It’s pretty much illegal to shoot off any sort of firework that leaves the ground. Here’s the definition of what constitutes ‘illegal fireworks‘ that L.A. County used for the 4th of July:

ILLEGAL FIREWORKS: Any item that explodes, rises in the air or moves about the
ground or any fireworks which is not approved and labeled “Safe and Sane” by the
State Fire Marshal, is considered illegal in California.

It appears as if there wasn’t a single household on Los Angeles that gave one flying fuck about that ‘rises in the air’ definition.