Hooters Is Starting A New Fast-Casual Take-Out Spot Called ‘Hoots’ And DID SOMEONE SAY CHICKEN WINGS?!

Nothing quite like a boys night out at Hooters to crush beer and wings while watching sports. Hooters is the grandaddy of all great wing places, growing out of the Central Florida swamp in Clearwater to one of the most Bro wing chains on the planet.

Hooters is mostly a dine-in, throw-your-elbows-on-the-table-and-drink-some-beer social experience. But given the popularity of take-out and fast casual joints, it’s ready to throw it’s hat in the ring and compete with spots like WingZone. So it’s starting a chain called, simply enough, “Hoots”.

Hoots will feature an abbreviated, one-page menu with some of the most popular items from full-service Hooters restaurants, including its classic chicken wings, in a new, scaled-down concept that’s part of the fast-casual trend, a news release said.

The initial Hoots, located in Cicero, Ill., will be 2,800 square feet, with 75 seats and a full-service bar, but will rely on counter service for both take out and dine-in customers, rather than having servers come to guests’ tables. It’s expected to open in mid-February. 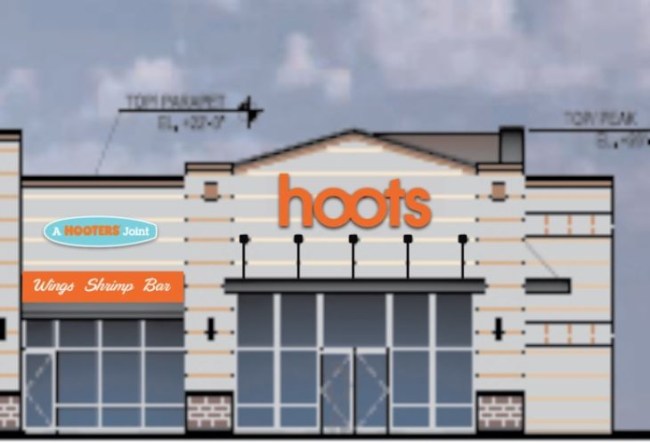 There is, however, one noticeable change about Hoots. There will be dudes working and don’t expect the typical skimpy garb of Hooters. via Tampa Bay Times:

One thing customers won’t be seeing at Hoots: the iconic Hooters uniform of orange shorts and tight white tank tops that helped earn the chain distinction as a “breastaurant.” Spokeswoman Lizz Harmon said that the Hoots concept will eschew the revealing outfits, and will also feature both male and female servers at the counter.

No babes? No problem. When the only thing you have on your mind is wings, you don’t necessarily need a busty girl in a restaurant to serve them to you to satisfy the craving.

It’s a whole new world out there, Bros. And Hoots is refreshingly a part of it.