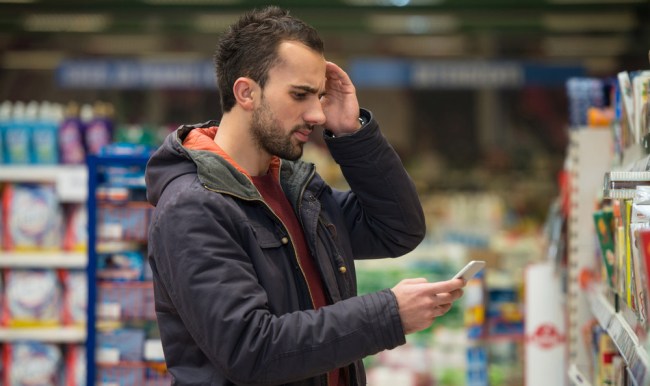 If you are or ever have been a husband you will be able to relate to this story. Heck, if you have ever had a girlfriend you can probably relate to this story. Because we’ve all been there, the wife or girlfriend sends us out to pick some things up at the store. We get there and have no freaking clue where to find the stuff she asked for, especially if it happens to be some very specific items she wants from the grocery store. Which is exactly what happened to this poor fellow who was sent on an errand complete with list in hand. (Note: The list doesn’t help, ladies.)

See if any of this looks and sounds familiar…

I sent my husband grocery shopping earlier (with a list) and it stressed him out so bad pic.twitter.com/KkGLznR3IW

“I sent my husband grocery shopping earlier (with a list) and it stressed him out so bad,” said Tasia, the wife in question.

Now, forgive me, but I am with this guy here. Shallots? Rice vinegar? Leeks?

Ya husband when he seen Leeks on the list pic.twitter.com/y6thgPL6U0

I wouldn’t have the first clue as to where to find any of that in the grocery store. And I am not alone…

You started my day off right. Reminds me of my Dad going shopping for my Mom. Hilarious.

😂😂😂Girl!! Why do we even bother? Lol These husbands are just clueless lol!

I know what shallots and leeks are, but as soon as I see those on the list it's no longer a solo trip. Nope. Not setting me up for failure.

But I bet he could tell the difference between every kind of Jordans from each year. They make space in their brains for stuff they like.

Not a fair argument there, by the way.

However, according to Tasia, her husband should have known what leeks are…

Ok fine but how doesn't he know that he constantly eats leeks (I put them in our cabbage)… you don't know what tf you eat???

My mentions are in shambles 💀 but just so you know, a shallot is what might happen if garlic and an onion procreated pic.twitter.com/BmUqYzvfzR