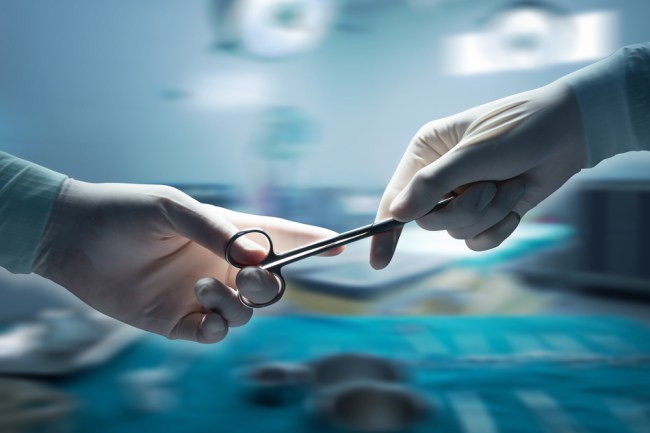 I’m fixed. I knew, even before I ever had sex (you know, with a woman), I did not want to ever have kids.  I guess I was pretty self-aware as a little kid.  I’m much too selfish to deal with off-spring and knowing how well-behaved my dogs are, I’d probably have raised a batch of little serial killers anyway.

People often ask me if I feel bad about “denying” my wife the “joys of motherhood.” I always tell them the same thing:  She can have all the kids she wants, just not mine and not while married to me. Besides, like I said before, I’m selfish. A pregnancy at this point in our marriage is grounds for divorce!

Anyway, to prevent the unthinkable, and rather than having to depend on my wife’s less-than-stellar memory to prevent an unwanted child from entering the world, I decided the best course of action was for me to get fixed. This also keeps her from actually having to take those hormones, which is probably better for her, too.

I decided to have this done at the ripe old age of 25, just after I moved to Denmark. The Danes have socialized medicine, if you didn’t know, so the procedure itself would be “free.” Of course, I was paying damn near 50% of my dishwasher wages to the government in taxes, so I use the term “free” very loosely.

I had to have a visit with a doctor first to discuss the issue. He was very concerned that a man so young would have this done.

I had my reasons.

It will come as no shock to those who know me that during my misspent youth I was a bit of a minor hoodlum. One night while driving mindlessly around Clayton County in my old 1971 Ford Pinto, a friend of mine noticed some sort of radio/microwave tower behind the local stop-n-rob store and we decided it would be -a good idea- to climb to the top of the damn thing. I still had some rappelling harnesses from my time in Boy Scouts, so we went home and got all the gear and headed back out.

I paid about as much attention to those big red warning signs posted all over the chain-link fence as you can guess while scaling over the locked gate. Who’s afraid of a little radiation?

We scaled the damn thing with no problems and out of pure spite, ended up hanging a big, painted white bed sheet from the top. What I probably should have considered was what kind of damage all those radio and microwaves were doing to my chromosomes.

So, you see, even had I wanted kids, I can’t be sure they wouldn’t have gushed out with three arms or something.

The doc scheduled the procedure for a few weeks off.

Now, I realize it sounds to you that I was pretty cavalier about the whole thing, having made up my mind and all. I can assure you there was no small amount of anxiety over the idea that I was going to let a complete stranger hack away at my balls with a razor-sharp scalpel.

Well, the fateful day arrived and I went to the hospital and checked in for the event.  It’s an outpatient thing in Denmark. I don’t know if it is here in the U.S. or not, but I was happy about that.

In the office there I was signed in by one of the nurses. I don’t know how many of you have ever been to Denmark, but the number of really fucking gorgeous women there is unbelievable. This nurse was one of the most beautiful women I’ve ever seen, and having lived in Denmark, I’ve seen a lot.

After I got changed into the goofy hospital gown that are the same the world over, she took me back to the operating room.

Once there, I was told she was going to “prep me” for the surgery. There was another freaking hot nurse in there to help her. OK, let me explain “preppping” for a vasectomy. I was made to lie down on the table and my little gown was lifted up.  And these two hot girls in their little white uniforms, donned rubber gloves and began to use a nice pan of warm, soapy water to give my cock and balls a thorough cleansing.

Yes, it was a nice as it sounds.

I thought about baseball.

Much better than I would have expected, considering the circumstances, but it happened. I could hear some chuckles about the turgid condition of my pecker (and I secretly hoped they weren’t laughing at the size of the thing!) and, with a face as red as a Soviet flag, I asked, “Well, I guess this happens all the time, huh?”

“No,” said the first nurse, “This is the first time we’ve seen it happen. Most men are too nervous and worried.”

So, I lay there and tried to not think about what was happening when the doc came in. He chuckled a bit (apparently, this was the first time any of them had seen an erect pen|s in the OR) and told me he was going to give me a “local anaesthetic.”

The syringe he jammed into my scrotum must have been the size of a fucking bic pen.

My erection went away.

The nurses built a little shield of cloth at my waist. I am guessing it was there to keep me from watching the thing. I was looking down watching as the doctor and the second nurse were doing something. I couldn’t feel a thing. I watched as the doc turned away quickly when a thin stream of bright red blood spurted up towards his face.

It wasn’t his blood.

The first nurse moved over and stood at my left, patting me on the shoulder.

“So, you’re job is to just stand there?” I asked, all confused.

“Yes, I am here to comfort you” she replied.

The thing had been fairly painless so far, except for the surprise scrotum-shanking doc first gave me, so I was wondering what I would need comforting for.

I didn’t have to wonder very long.

I don’t know precisely what it was the doc did, but he did something that felt as like he was yanking on a big fucking steel cable attached to the top of my intestines and ran out the bottom of my nut-sac. I thought I was going to puke.

To have a surprise gut-wrenchingly sharp pain swiftly delivered to your balls is bad enough, but to lie there on an operating table while beautiful foreigners jabber in a language you barely understand waiting for what you now know is going to be brutally painful is an exquisite sort of torture.

You can trust me on this.

After the doc finished tugging on my innards and hacking out the last little bit tubing, he asked me if I wanted to see them.  “They look like little macaroni” he said, and held a little Petri dish out so I could see.  The little remnants of my Vas Deferens did look like little macaroni.  I just looked at them and said “cool.”  If I had been quicker with my thoughts, I should have snatched one up and said “I wonder if they taste like it,too?” and popped it in my mouth. I’m creepy like that.

Afterward, I was given some medication for pain, which I wolfed down greedily and then was led to a little room. In this room, my balls were bandaged up, and I was giving some kinky-looking mesh underwear. The doc dropped in to tell me to “take it easy” for about a week.He needn’t have bothered telling me.  After what I just done to my junk, I needed to take it easy.

By the time we got back to our apartment, the swelling had begun. Someone once said that testicle size was the measure of a man. Well, I had become a MAN!

My nuts continued swelling until each one looked like a purple-and-red-flesh colored orange! For the next few days, I only got off the couch to go to the bathroom, because the ice packs I had jammed down the front of those mesh-briefs to relive the swelling and the ache made walking a nightmare.

After three or four days, I was able to walk normally, but going anywhere meant I had to take the bus. In Denmark, people ride bicycles everywhere. I wasn’t even going to attempt to ride a bike. No way in hell was I going to run the risk of bumping over a curb and slamming my ‘taint down into the seat.

Who knows what kind of irreversible scrotum damage that would cause?

Time has passed and it’s now been very nearly two decades since I was rendered sterile. In those years, I have not once had a moments regret about my decision, and looking back on the procedure, it was definitely worth it for all the non-condom sex I have been able to have without fear of producing a little mini-me. If only I had done this when I was single!

And no, the amount that comes out is still the same as before.

I hear now they can do vasectomies without even making a cut.

Editor’s Note: This was originally published on BroBible in March 2012. But we’re publishing it again three years later because we forgot how good it is. Original published as a Facebook note. Republished with Mark’s permission. Snip snip.