ISIS Video Shows Off New Weapons Of Terrorism And Calls For Attacks In U.S. 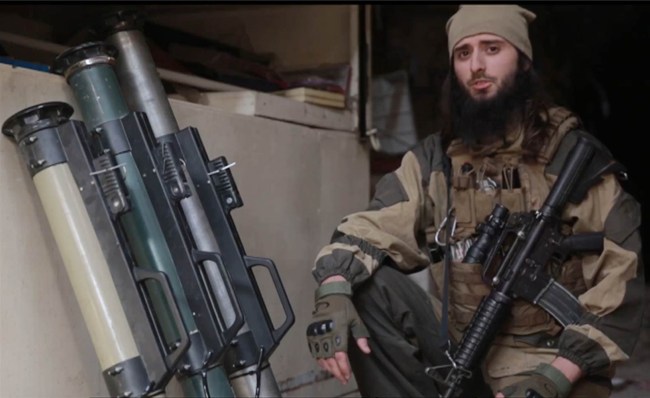 ISIS has released a new video with an alleged American fighter calling for attacks of non-believers on U.S. soil. The chilling 44-minute video shows off some new weapons that the terrorist group has built including drones and rovers.

A man named Abu Hamza al-Amriki, which al-Amriki means “The American,” urges viewers to commit lone-wolf attacks in the U.S. to avenge America’s military action in the Middle East.

“America today is the one carrying the banner of the cross and waging war against Muslims,” he says.

He urges jihadis to “liberate” themselves by killing anyone who rejects Islam by stabbing them with knives, driving cars into crowds of people, and even throwing them off buildings.

The video features photos of the Las Vegas Strip, Times Square, and banks in Washington as potential targets.

“It showcases a range of proprietary weapons that ISIS militant workshops have developed,” Alkhouri said in English. He flaunts weapons such as rocket-propelled grenade launchers, shoulder-launched surface-to-air missiles, video-equipped guided missiles, a remote-controlled “rover” that can detonate explosive devices under military vehicles, and a drone that could drop a bomb on a crowd.