This guy is an asshole. No ifs, ands or buts about it. The lunatic goes on a full-fledged chest-pounding Neanderthal tirade against a family that was just enjoying a day at the beach. Alexander Downing ruined a family reunion as well as other people’s vacations on South Padre Island with his insane bigotry.

The 35-year-old psychopath from Waterford, Connecticut verbally assailed a Muslim family, who had small children with them, with an expletive-laden onslaught on May 3.

The allegedly drunk asswipe grabbed his tiny manhood on several occasions in front of children and told the family to “suck my dick!”

While enjoying our time at the beach during a family reunion, our kids and us had to experience ugliness and aggressiveness in the worse shape and form possible. We were staying at the South Padre Pearl hotel and went to the beach through their private access. My father was approached by two woman who were also enjoying their time. The women asked him to help with talking to a stranger who was harassing them. All my father said to the guy was “please enjoy your time and have fun and let everyone else here enjoy their time.” The guy seemed to listen and walked away. He then came back to my father and started throwing racist comments. He was yelling so loud that my uncles and my brother came over from the water to see what was going on. The insane man came close to the kids and that’s when my uncle stood up to him and defended us and the kids, including my 4 year old cousin, 4 and 2 year old nephews. The video here shows a glimpse of what we all had to experience. It is worth mentioning that we contacted South Padre police and the man left on his way back o the hotel. A little after that the police came and told my father to call them again if he harasses us again. We went back to playing in the water and sand then the insane man came back with even more aggressiveness and more racial slurs. We called 911 again as you may be able to hear on the video. After about 20 minutes of him going crazy he left back to the hotel. The police then came back and they arrested the man at the hotel restaurant. When we spoke to the hotel management, they said they couldn’t do anything at the time because he is in police custody and that if they see him, they will evict him. The next morning my uncle saw him at the front desk and talked to the management. They plainly told us that they can’t do anything about it right now and that if he does this again he will be arrested. I don’t understand what it takes for this hotel to take actions. Do they need someone to get hurt?

Finally, thanks to the cops who took the insane man right away and assured us that this is a nice place but every now and then they get a crazy person like this.

Overall we enjoyed the lovely island and we will definitely go back to South Padre again, we surely will never go back to Pearl South Padre hotel, Texas again.

Thankfully the family did not react physically to the cuntrag and there was a beachgoer who tried to calm down Downing and stood between him and the family.

Downing was charged with public intoxication.

Downing wasn’t such a tough-talking badass when was arrested. He was crying like a little bitch in his mughsot. 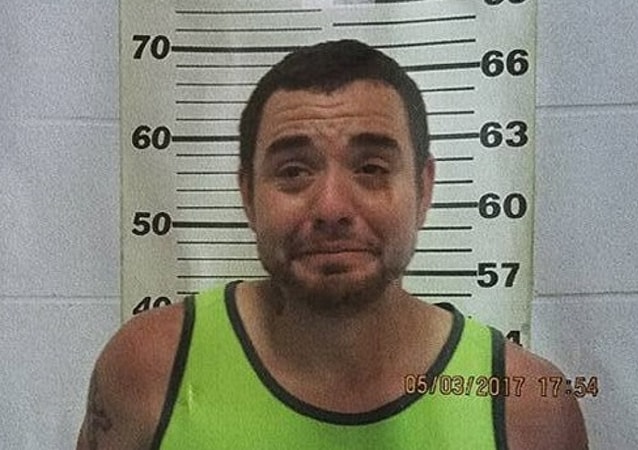 Downing has several other arrests on his record. He was arrested in Polk County, Florida, in October 2003 on charges of possession of not more than 20 grams of marijuana and being a fugitive of justice. He was arrested again in Polk County in January 2004 on a fugitive from justice warrant, along with a traffic violation while driving with a suspended license and first-degree petit larceny of items worth $100 to $300. He was arrested multiple times in Connecticut in 2010 and pleaded guilty to charges of second-degree breach of peace, possession of less than 4 ounces of marijuana and sixth-degree larceny.

And this is the fuckwad who thinks he represents all that is grand about America.