J.K. Rowling Ethered Piers Morgan On Twitter Then Morgan’s Son Went And Made It Super Awkward 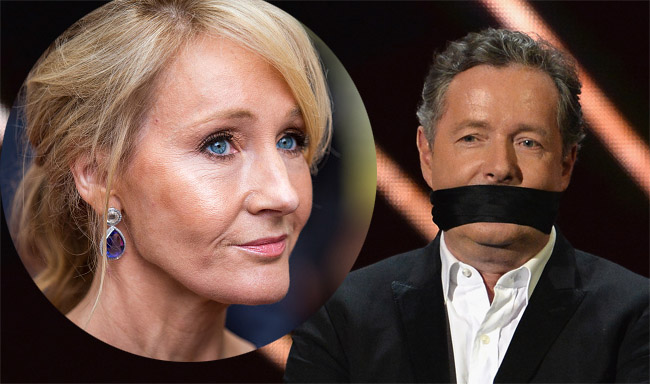 Piers Morgan, who I like to refer to as the Skip Bayless of non-sports media because he just says shit just to get a reaction out of people, got a very strong one out of Twitter legend J.K. Rowling this past weekend.

One of the people who took great joy in seeing Morgan being treated this way was Harry Potter author J.K. Rowling…

Yes, watching Piers Morgan being told to fuck off on live TV is *exactly* as satisfying as I'd always imagined. https://t.co/4FII8sYmIt

Naturally, being the troll that he is, Morgan responded…

This is why I've never read a single word of Harry Potter. https://t.co/XUJBMs4KKm

Annnnnd then they were off to the races…

Because you had a premonition that one day the author would roar with laughter at seeing you called out for your bullshit on live TV? https://t.co/8rkKSqJTnG

Everything I said was factual.
If you think screaming 'FUCK OFF!!!' at me changes that, then you're mistaken. https://t.co/0U9fVoTjfc

.@piersmorgan Would you like a couple of hours to mock up some pictures of refugees carrying explosives to substantiate your position? https://t.co/sFj0kqIajd

The superior, dismissive arrogance of rabid Remain/Clinton supporters like @jk_rowling is, of course, precisely why both campaigns lost.

The fact-free, amoral, bigotry-apologism of celebrity toady Piers Morgan is, of course, why it's so delicious to see him told to fuck off. https://t.co/4XNF4G0nlD

.@piersmorgan If only you'd read Harry Potter, you'd know the downside of sucking up to the biggest bully in school is getting burned alive.

No bigger bullies right now than the shrieking, hysterical anti-Trump celebrity brigade.
You lost, so suck it up Dolores. https://t.co/RFQkyJWxZ5

Then just to make it even more weird, Piers Morgan’s son Spencer followed all of that up with a tweet of his own…

That there would be a tattoo AND a necklace of the symbol that represents Deathly Hallows from the Harry Potter series.

I think Piers just got owned by his son in this argument, right?

At least Piers was a good enough sport to retweet it.

Meanwhile, this is now happening…

.@piersmorgan Mr. and Mrs. Dursley, of number four, Privet Drive, were proud to say
that they were perfectly normal, thank you very much.

.@piersmorgan They were the last people you'd expect to be involved in anything strange or mysterious..2/32567

.@piersmorgan because they just didn't hold with such nonsense. 3/32567

.@piersmorgan Mr. Dursley was the director of a firm called Grunnings, which made
drills. He was a big, beefy man 4/32567

That’s right, a bookstore called Big Green Bookshop is now tweeting the entire story of Harry Potter to Piers Morgan and they don’t seem like they’ll be stopping anytime soon based on that tweet countdown they’re displaying.

So @Biggreenbooks is tweeting me an entire Harry Potter book because I'm a 'twat'.
This, of course, just makes him an even bigger twat.