Kal Penn Responds To Racist Troll On Instagram By Raising $300,000+ For Syrian Refugees 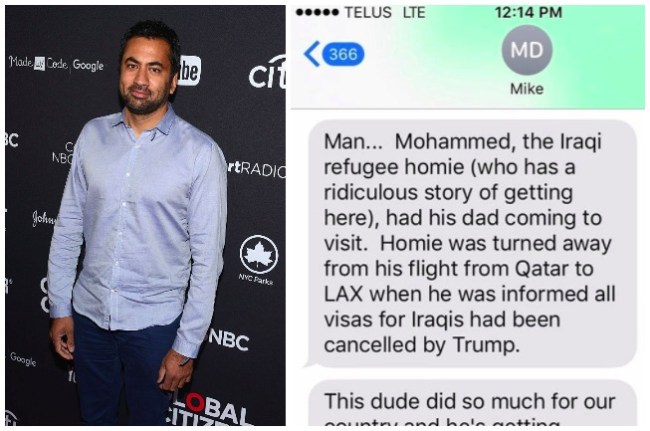 On Friday afternoon, President Trump signed an Executive Order that’s caused chaos and outrage at America’s airports, banning entry to the United States for refugees and immigrants from seven predominantly Muslim countries. Protests have erupted around the country, with lawyers and elected officials flocking to the arrivals section of America’s airports to legal, visa-holding immigrants enter the United States after being detained by Customs and Border Patrol. Last night two federal judges in New York and Virginia ruled that clauses of the Executive Order were unconstitutional, causing CBP to release some of the immigrant detainees to their families.

Early on Saturday, Kal Penn shared his thoughts on the ban with a personal story from a friend about an Iraqi refugee homie:

My friend Mike just sent this heartbreaking text about his refugee friend. Families are being torn apart. Shame on us. This is un-American. pic.twitter.com/eefHr9yo5v

Kal is an American citizen born in Montclair, New Jersey to Gujarati immigrant parents. In the comments of his Instagram post, a racist troll went after the Harold & Kumar actor and former White House official with a straight-up barbaric statement — “you don’t belong in this country you fucking joke.”

So Kal went high — He immediately set up a crowdfunding page for Syrian refugees.

To the dude who said I don't belong in America, I started a fundraising page for Syrian Refugees in your name. https://t.co/NOR5P48fBi pic.twitter.com/jtJOsK9GrU

Kal keepin’ it real and putting ugly racist trolls in their place is the very definition of a Bro Move. I donated on behalf of myself and the BroBible OGs who stand for basic human decency.

Donate for yourself over at CrowRise….