Obnoxious Lady Kicked Off A Plane For Berating A Trump Supporter Sitting Next To Her, Whole Plane Cheers 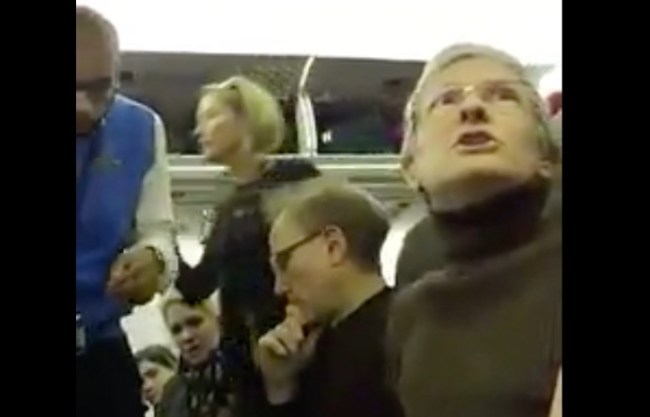 Imagine this. I hope this never happens to you, but for the sake of the message, put yourself in this position. Fast forward 25 years. You’re sitting on a plane with your wife in Baltimore about to take flight for Seattle, a place where you’re going for unfortunate circumstances. Your mother has passed. Your wife is sitting next to you, and instead of consoling you and rubbing your back and gifting you her bag of peanuts, she takes it upon herself to antagonize a passenger sitting next to you for being a Trump supporter, who had come to D.C. to celebrate Trump’s inauguration.

You want to diffuse the situation but your immense grief forbids you to, and your wife has proven to be a runaway train in the past, so its best to sit on the sidelines for this one. Your wife then calls over a flight attendant and asks her to change the man’s seat, to which the flight attendant answers ‘You don’t have that right.’ She then turns to the man and says,

‘You put that man’s finger on the  nuclear button’ and adding: ‘That man doesn’t believe in climate change. Do you believe in gravity? Did you know gravity’s just a theory?’

Another crew member comes over and tells the woman she is going to have to leave the plane. That is when she throws your mother’s death in their face, a shameless grief mongering tactic and wildly dishonorable.

‘I’m going home now. My mother-in-law – his mother died,’ the woman says, pointing to you.

You and your wife get kicked off the plane to cheers and U-S-A! chants. Your wife has created the atmosphere that people are actually cheering for you to leave the plan on one of the worst days of your life. When you arrive in Seattle–if you arrive in Seattle–you have to tell your family that you missed essential time to grieve with them because your wife wouldn’t shut her fucking mouth.

Herein lies the question: Do you divorce her right then and there or do you wait until after the services? Those are the only two options, right? Or am I being a little narrow-minded? You tell me.

That is the EXACT scenario that occurred on Saturday on a flight from Baltimore to Seattle. Here is the footage of the couple being kicked off the plane, to cheers and a faint U-S-A chants.