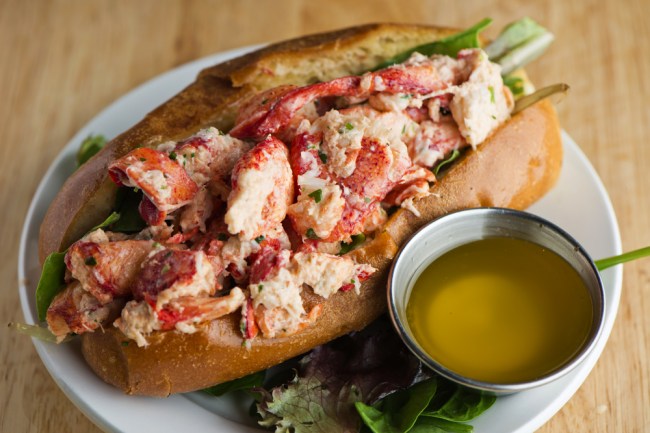 This is a world record that seems to fall at least once a Summer. The previous record was set last August by Prince Edward Island Fishermen’s Association (in Canada, obviously) and has already been broken within the span of a year. It’s nice to know that the lobster roll world record has come home to American soil, but, yesterday was the first day of Summer. There are plenty of weeks/months ahead of competing lobster shacks to plan their own lobster roll world record attempt before the season ends.

Some would claim that the lobster roll is the best sandwich, I’d say it’s top 3 for sure. If you are looking for a great lobster roll recipe for the Summer you should start with this recipe from Luke’s Lobster because it’s goddamn amazing.

Step 1: Steam the 5 pounds of lobster for 10-12 minutes, then pick lobster meat (should yield 1 pound of lobster meat).
Step 2: Use top-split New England-style hot dog buns — butter sides of 4 rolls and grill until golden brown.
Step 3: Line inside of hot dog bun with some mayonnaise.
Step 4: Add 1/4 pound of prepared lobster meat, then drizzle a little melted butter on top of lobster.
Step 5: Sprinkle a pinch of celery salt, pinch of oregano, and pinch of black pepper on top of lobster.
Squeeze a little fresh lemon over the lobster roll. Serve.

Dammit, now I want a lobster roll for lunch. Who’s coming with me?