Intel Acquires Self-Driving Startup For $15 Billion, Plus Yahoo’s Marissa Mayer Has A Parachute Made Of Gold

QUOTE OF THE DAY

“I am telling you, the world’s first trillionaires are going to come from somebody who masters AI…and applies it in ways we never thought of” — Mark Cuban, self-made billionaire and star investor of “Shark Tank.” Better get working, Brewers.

…By acquiring self-driving Israeli startup Mobileye (+28.24%) for a whopping $15.3 billion. The deal could solidify Intel’s position in the race to take fully autonomous cars to market. Mobileye—which provides the brains for Tesla’s autopilot software (although the two have since had a falling out)—specializes in the technology behind self-driving cameras. So basically allowing your car to literally see the road…pretty cool. It’s also one of the most important areas for the self-driving segment; cars may generate a whopping gigabyte of information every second. Mobileye’s stock exploded roughly 30% when investors heard the news. Don’t believe us? Take a look: 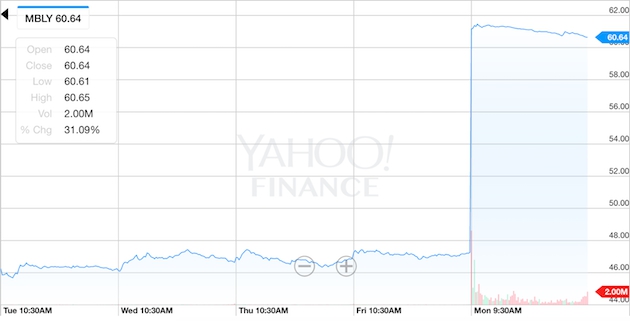 Competition is fierce though, and self-driving startups are being gobbled up left and right by traditional automakers like GM, Ford and Mercedes, not to mention newer companies like Tesla, Google’s Waymo and even Uber. Ladies and gentlemen, start your engines.

…Ford’s (+0.08%) Lincoln to make SUVs in China by 2019. Long story short, it’s a new Lincoln model that will only be available in China, and thus will be perfectly tailored to suit Chinese tastes. Lincoln’s latest move signals that the luxury brand is looking to tap into the world’s biggest auto market, as well as catch up with rival carmakers who already manufacture in China. Sales of Lincoln vehicles in China leapt nearly 180% last year—and moving key manufacturing segments to China should turn that foothold into a stronghold.

Yahoo: The Fate is Sealed

…And the Verizon saga takes one last turn. Let’s start with the basics: Yahoo shareholders are expected to approve the sale of its core assets to telecom giant Verizon for $4.48 billion. It’s a bit lower than the $4.8 billion figure reported in 2016, but hey, the deal’s making progress. And what about the rest of Yahoo—its stake in Alibaba, its own cash and Yahoo Japan? Well, the remaining pieces will now be called Altaba, and Thomas McInery, current Yahoo board member, has been named CEO. So where does current CEO Marissa Mayer fall in all this mess? Filings show a juicy $23 million severance package if she’s let go within a year of the deal. Can’t go wrong either way, right?

…Here comes Brexit. If the United Kingdom’s June vote to leave the European Union feels like a distant memory, it’s not. Yesterday, U.K. Parliament passed legislation that will allow Prime Minister Theresa May to start negotiating Brexit terms with the EU. Plus, May is expected to get the ball rolling on Brexit as early as the end of March, so all the hype will become a reality really, really quickly. Seems too easy? It is—right as May finally got Parliament’s backing, Scotland (a member of the U.K.) called for another vote of independence to leave the U.K., throwing another wrench into May’s plans. May the force be with her.

SXSW Kicks Off in Austin

Last Friday was the beginning of South by Southwest (SXSW), an Austin, TX classic. Set to wrap up on March 19, the massive conference/festival brings together the leading minds and superstars from movies, music and technology. Here’s what’s gone down so far:

Interview Question of the Day

What sectors have higher exposure to inherent risk? (Answer)

Business Person of the Day

History has been made with the appointment of Raphael Bostic as the President of the Atlanta Fed. Mr. Bostic will be the first African American to lead one of the Fed’s regional banks, and many believe his hire will bring greater consideration for the needs of minorities and their socioeconomic development.

Remember when hedge fund manager Bill Ackman bet big on Valeant? Yesterday marked the end of the saga: Ackman has sold out of Valeant entirely, liquidating at around $11 per share. He bought the stock at an average cost of $196 in 2015 and has believed in the drug company’s turnaround since then…until now.