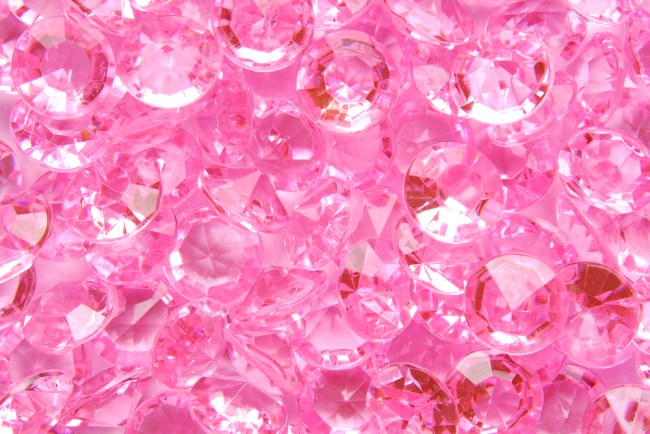 The current world record for ‘most expensive diamond’ sold at auction sits at $57.5 million, which is ABSOLUTELY INSANE. That diamond was sold at Christie’s auction house in Geneva, and it was a flawless 14.62 ‘Oppenheimer Blue’ diamond sold back on May 18th, 2016.

Can we take a second to just appreciate the fact that $57.5 million is WAAAAAYYYYY more than most people make in a lifetime and someone’s spending that on a fucking diamond. Well, actually, someone is expected to spend A LOT MORE than $57.5 million on this 59.60 carat internally flawless pink diamond, The Pink Star, when it goes up for auction at Sotheby’s Hong Kong Magnificent Jewels and Jadeite next month (April 4th).

Why’s this diamond expected to shatter the existing ‘most expensive diamond’ world record? Because it’s actually set the record before, but due to some shady business dealings the purchasers of the 59.60 carat pink diamond backed out of their bid of $83 million from an auction at Sotheby’s Geneva back in 2013.

The oval-cut diamond sold for a remarkable $83 million at Sotheby’s Geneva in November 2013, a figure that remains the highest ever for a diamond to this day. However, it wasn’t long after the sale that rumors started to float that the consortium of buyers, led by diamond cutter Isaac Wolf, reneged on the purchase. In February 2014, Sotheby’s confirmed the rumors in its annual report, saying the diamond is now part of its inventory valued at approximately $72 million. The auction house reportedly had to buy back the diamond for $60 million because it had guaranteed that price to the original seller of the diamond.
Currently, the world’s most valuable diamond sold at auction is the 14.62-carat “Oppenheimer Blue,” which sold for more than $57.5 million at Christie’s Geneva sale held May 18, 2016. The Pink Star has the possibility of not only breaking the record but shattering it.
“At a time of unprecedented demand for the finest in colored diamonds, I am delighted to be bringing this magnificent stone back to the market. The extraordinary size of this 59.60-carat diamond, paired with its richness of color, surpasses any known pink diamond recorded in history,” David Bennett, worldwide chairman of Sotheby’s Jewellery Division, said in a statement. via Fortune

Again, this is tens and tens of millions being thrown around on a tiny fucking stone that only has value because people say it does. And really, that value only exists because of scarcity. Companies like DeBeers buying up all the massive diamonds in the world and locking them away in vaults, creating scarcity. You could write an entire book on why diamonds are so expensive, and I’m sure those books already exist, but if you want a brief explanation you can check out this article on Business Insider.

In the meantime, I hope you’re going to be okay going forth into the world knowing that a tiny fucking diamond is expected to sell for somewhere between $60-100 million at auction while the rest of us are drowning in student debt.

For pictures of this flawless pink diamond you can CLICK HERE to head on over to Fortune.com.