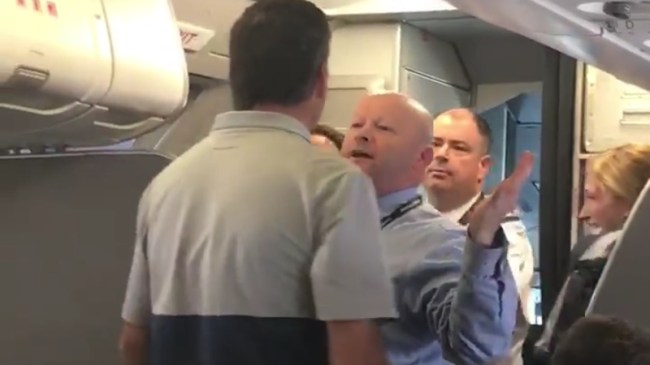 After United Airlines got utterly destroyed by everyone for brutally removing a passenger from an overbooked flight, you’d think all of the airlines would be chill. But an American Airlines flight attendant saw the guy getting dragged off the flight and was like, “Hold my overpriced $8 airline beer and watch this.”

According to a witness, an American Airlines flight attendant allegedly “violently took a stroller from a lady with her baby on my flight, hitting her and just missing the baby.” A male passenger then told the airline steward, “You do that to me and I’ll knock you flat.” Then the airline steward challenged the passenger to a fight (55-second mark). “Hit me, come on,” the flight attendant told the passenger as his colleagues held him back.

While all of this is happening, the mother is crying uncontrollably.

Flight AA591 was going from San Francisco to Dallas-Fort Worth and departed at 2:18 p.m. on Friday, about an hour after its scheduled 1 p.m. departure time.

Americans Airlines said it was investigating the incident in a statement.

“What we see on this video does not reflect our values or how we care for our customers. We are deeply sorry for the pain we have caused this passenger and her family and to any other customers affected by the incident,” the statement read.

American Airlines said they are “taking special care of her and her family and upgrading them to first class for the remainder of their international trip.”

The flight attendant has since been suspended.

The argument seems to have stemmed from the stroller. According to Tom Watson, who was sitting in the first row behind first class, he said the woman refused to let go of the stroller.

“The lady and her two children were seated near the back of the plane. She was somehow able to get her stroller on board and back near her seat,” he said.

Watson said he’s not sure if the woman tried to put the stroller in the overhead bin. A short time later, a flight attendant approached the woman and told her she cannot have the stroller on the plane.

“She refused to let him take it and she was almost to the point of shouting,” he said.

The flight attendant then asked for security personnel, which “escalated” the situation, according to Watson.

Watson said the flight attendant’s tone was “aggressive” and the woman was refusing to let go of the stroller, which escalated the situation.

The flight attendant then responded by jerking the stroller from the woman, knocking her in the head and nearly hitting the children, according to Watson.

“The flight attendant should not have been so aggressive and should have been more aware of the kids,” he said.

The woman was escorted off the plane and the flight attendant returned to the plane a short time later.

“The woman knows not to bring the stroller on a plane, she refused to let it go… she was shouting, so she is also at fault in my opinion,” he said. “But don’t get me wrong, the flight attendant should be way more professional than he was.”

The flight attendant requested security personnel, then aggressively took the stroller from the woman, hitting her on the head with it.

Here is the rules on strollers from the American Airlines website:

Customers are allowed 1 stroller and 1 car seat per ticketed passenger. Both items may be checked at the ticket counter or one item can be checked at the gate and one at the counter. These items are checked at no charge, when traveling with a child or to adopt.

Sounds like someone fucked up at the gate to allow the mother to bring the stroller on the plane in the first place.