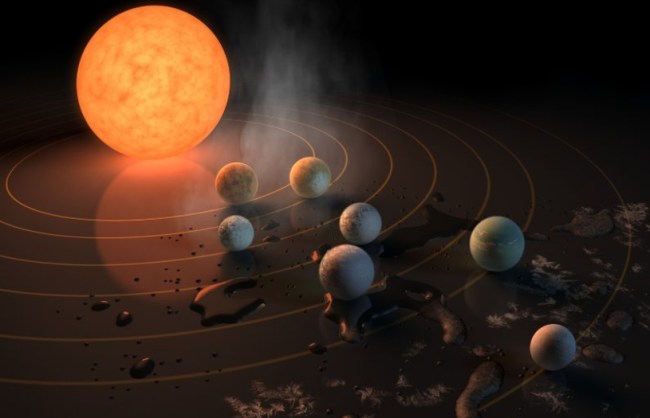 HUGE, HUGE news from NASA today, Bros! The scientists in the National Aeronautics and Space Administration just discovered a new solar system with seven “earth-sized” planets that’s a couple blocks down from our solar system. On 39 light years away, the planets are revolving around an “ultra cool” star called TRAPPIST-1. NASA says three are CONFIRMED in a habitable zone for life, so we’re ALL thinking it…

It’s the largest batch of Earth-sized habitable-zone planets around a single star.

In the words of NASA:

“This discovery could be a significant piece in the puzzle of finding habitable environments, places that are conducive to life,” said Thomas Zurbuchen, associate administrator of the agency’s Science Mission Directorate in Washington. “Answering the question ‘are we alone’ is a top science priority and finding so many planets like these for the first time in the habitable zone is a remarkable step forward toward that goal.”

At about 40 light-years (235 trillion miles) from Earth, the system of planets is relatively close to us, in the constellation Aquarius. Because they are located outside of our solar system, these planets are scientifically known as exoplanets.

This exoplanet system is called TRAPPIST-1, named for The Transiting Planets and Planetesimals Small Telescope (TRAPPIST) in Chile. In May 2016, researchers using TRAPPIST announced they had discovered three planets in the system. Assisted by several ground-based telescopes, including the European Southern Observatory’s Very Large Telescope, Spitzer confirmed the existence of two of these planets and discovered five additional ones, increasing the number of known planets in the system to seven.

Space is so lit.

These 7 Earth-sized planets were seen by @NASASpitzer around a nearby, ultra-cool dwarf star called TRAPPIST-1: https://t.co/G9tW3cJMnV pic.twitter.com/Z6gvaH96Tz

The TRAPPIST-1 star & 7 Earth-sized planets orbiting it, are relatively close to us; located ~40 light-years away: https://t.co/QS80AnZ2Jg pic.twitter.com/GiKAFXyNvo 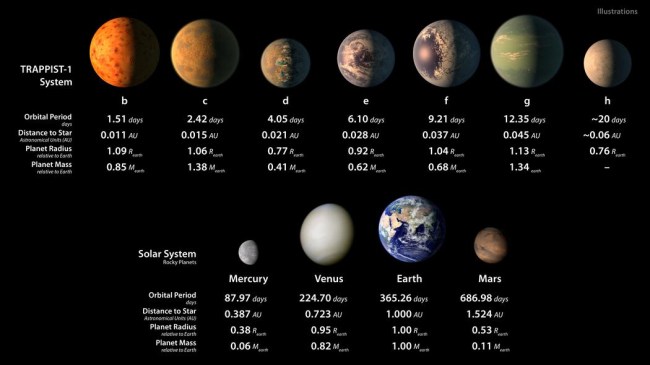