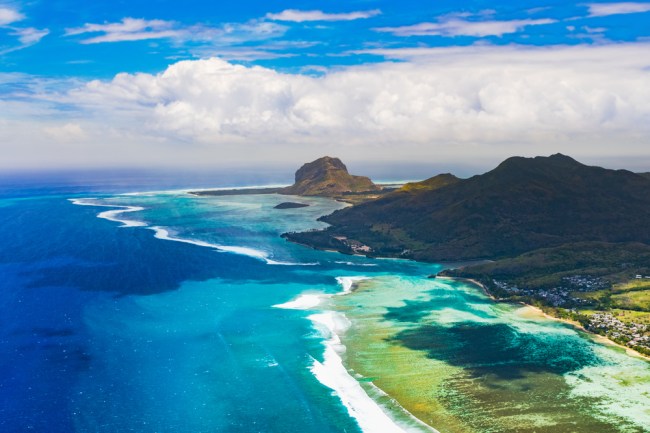 Oceans truly are the last places on planet earth to do any real exploration. There’s still so much we haven’t seen happening beneath the ocean’s surface. Case in point, an entire lost continent was just discovered off the island of Mauritius (pictured above) in the Indian Ocean.

The lost continent is said to come from the 200 million-year-old super-continent of Gondwanaland after that continent splintered into what is now Africa, South America, Antarctica, India and Australia. Scientists have dubbed it ‘Mauritia’, and they announced their findings this week in the journal of Nature Communications.

I’ve only ever known Mauritius as one of the shark attack capitals of the world, and an island vacation destination, but apparently, it has significant geological foundation.

Professor Lewis Ashwal, lead author of the paper, says there are a number of pieces of “undiscovered continent” of various sizes spread over the Indian Ocean, left over by the breakup.
“This breakup did not involve a simple splitting of the ancient super-continent of Gondwana,” says Ashwal, but “a complex splintering took place with fragments of continental crust of variable sizes left adrift within the evolving Indian Ocean basin.”
The team made the discovery by analyzing a mineral — zircon — found in rocks spewed up by lava during volcanic eruptions.
They said that remnants of the mineral were way too old to belong to Mauritius. “Mauritius is an island, and there is no rock older than 9 million years old on the island,” says Ashwal. But by studying rocks on the island, they found zircons that were 3 billion years old.

What a time to be alive!

Side Note: if any of you bros out there are marine biologists and can get me a piece of the rock from this new continent I’d be very appreciative. I’d love to have a 3 billion-year-old rock sitting on my mantle instead of the bunk ass Tiffany’s Silver Candlestick some relative gave us a few years ago.