While Nobody Swipes Right On Your Profile, Orangutans Are Hooking Up By Using A Tinder For Apes 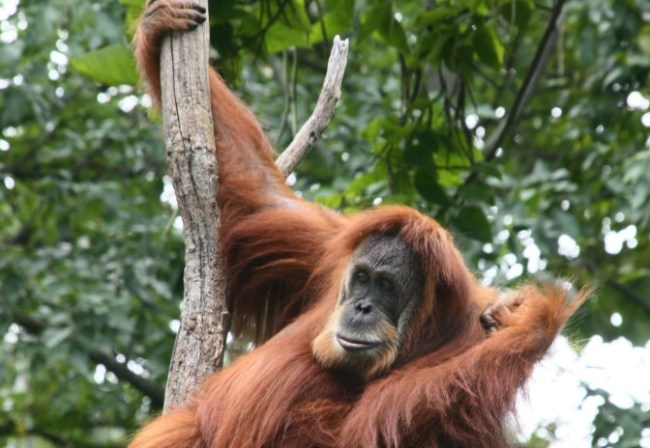 Why should us privileged humans have access to dating sites? What about poor primates? Why should they be stuck with banging whoever they meet while looking for fruit on the branch of a tree? One lucky orangutan is getting an ape version of tinder to find a fuck friend.

Behavioral biologists at the Apenheul Primate Park, in Apeldoorn, the Netherlands, gave an orangutan a touchscreen tablet that featured pictures of possible partners from an international great ape breeding program to find her new love. The 11-year-old female ape named Samboja swiped intensely to find a suitable partner. (She probably wasn’t been told the tragic news from May 28, 2016, and was frantically trying to match with Harambe).

Samboja was so excited about swiping right for the perfect fuckbuddy that she destroyed the touchscreen.

The tablet, reinforced with a steel frame, was tested successfully for the first time two weeks ago on two older orangutans. But Samboja obliterated the tablet. Can’t really blame her, who hasn’t wanted to do the same after seeing some of the poor prospects on Tinder.

The four-year experiment, which has been called “Tinder for orangutans,” will attempt to gain greater insight into how female orangutans make their mating choices. The male orangutan could come from as far away as Singapore, so the zoo wants to make sure that the chosen mate tickles Samboja’s fancy.

“Often, animals have to be taken back to the zoo they came from without mating,” said Thomas Bionda, a behavioral biologist at the zoo. “Things don’t always go well when a male and a female first meet.”

Might have to put my profile on orangutan Tinder to increase my chances.