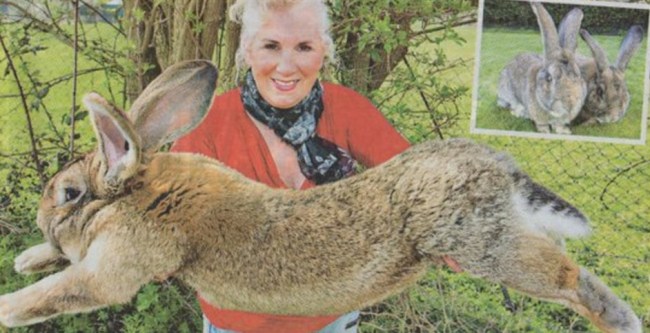 Thought publicity for United Airlines couldn’t get any worse? How about an adorable bunny, who could have potentially been the world’s largest rabbit, was found dead after flying on United Airlines. Ooof. Only weeks after their disastrous incident of a doctor being bloodied and bruised from being forcibly removed from a flight, United has moved on to bunnies. On the bright side, United Airlines apparently does not discriminate against any species in their unique treatment of flyers.

United Airlines has launched an investigation into the death of Simon the bunny. The 10-month-old, 3-foot-long rabbit was flying from London’s Heathrow airport to O’Hare Airport. Of course he was. The continental rabbit had a vet check shortly before traveling but mysteriously died on the trans-Atlantic flight. Right around Easter too? For fuck’s sake United.

The cuddly critter was owned by breeder and former Playboy model Annette Edwards from Worcestershire, England who was distraught over the news.

“Simon had his vet check just before getting on the plane,” she said. “He was fit as a fiddle.”

United released a statement that it was “saddened” by the death of Simon.

“The safety and wellbeing of all the animals that travel with us is of the utmost importance to United Airlines and our PetSafe team,” the airline said. That United Airlines PR manager job is still one of the toughest in the country.

Edwards said the airline was examining CCTV images to determine how the bunny died.

Simon is the son of Darius the bunny (Seen above and below), which currently is the largest rabbit in the world at 4-foot and 4-inches long. Simon was being shipped to the U.S. to his new owner who is allegedly a celebrity. Annette says it costs around $6,400 to raise these gargantuan rabbits, and Edwards sells them for $640.

You may have heard of Edwards in the past after she garnered worldwide attention when she got plastic surgery to look like cartoon character Jessica Rabbit.

There is no truth to the rumors that Simon was dragged off the plane because United Airlines overbooked their cargo space.