The entire Northeast got pounded by a blizzard yesterday with some areas reportedly getting over 12 inches of snow. One of the cities rode hard and put away wet by Winter Storm Niko was Springfield, Massachusetts where WWLP meteorologist Jennifer Pagliei was video bombed by a ‘Pot Sasquatch’.

It’s clear that the Pot Sasquatch was hiding in the cut, waiting for the perfect moment to present itself before video bombing the meteorologist. The second the street segment starts rolling Pot Sasquatch crawls out and begins to make his presence felt: 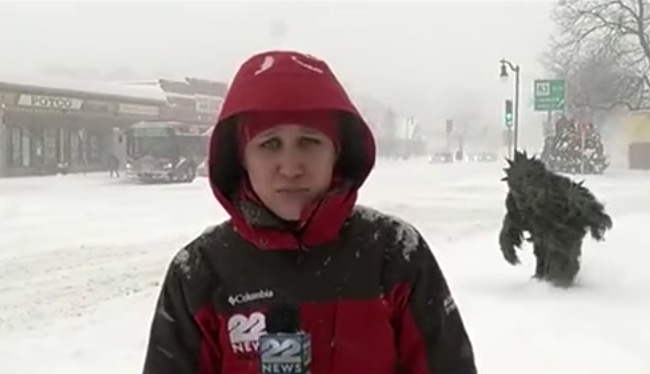 Recreational use of marijuana is now legal in the state of Massachusetts for persons aged 21-years and over, and this might account of the Cannabis Sasquatch finally feeling comfortable enough to leave the woods and visit the cities.

WWLP meteorologist Jennifer Pagliei later posted on her Facebook page that it was a ‘walking tree’, but WWLP corrected her and acknowledged that it was a straight up weed sasquatch in their own Facebook post.