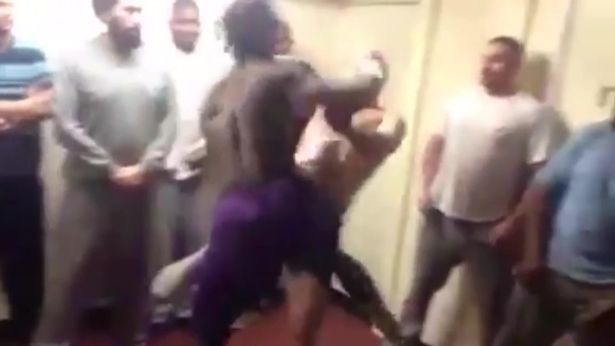 I surmise that prison can be pretty boring. Logistically, how many hours a day can you spend at the primeval prison gym or fashioning a shiv? You sometimes need to broaden your horizons in prison and start a fight club. That’s indeed what happened at the Featherstone Prison in the U.K. that houses more than 600 inmates.

Leaked cell phone footage shows a crowd of 20 prisoners cheering on two inmates brawling. The illegal Fight Club-style brawl inside the British jail shows inmates flashing gang signs as they make sure no guards in the area. “Keep the door locked,” an inmate says as another prisoner says, “Yo, ain’t no-one coming in from now.” The video was uploaded to Facebook last week.

The combatants have their hands wrapped in tape before they exchange blows. The fight begins and they trade punches before the one inmate is knocked out. The spectators scream “finish him” as the beaten man lays helpless on the ground. Eventually, the fight is broken up.

“We are committed to making prisons places of safety and reform and are stepping up measures to tackle violence and find and block mobile phones in prisons,” a prison service spokesman said. “This behavior is completely unacceptable and we are working to remove the content from social media.”