10 Reasons Why Amusement Parks Are Overrated 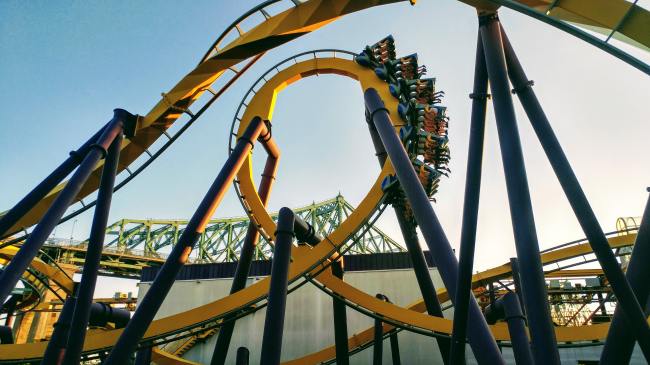 If you were lucky enough to make regular trips to an amusement park when you were a kid, you likely look back fondly at the joyous summer days spent at Six Flags (or whatever attraction you were near) that were full of laughter and innocence. However, if you really think back to those times, then you will remember a bulk of the time inside the park was spent complaining about how long the lines were and how hot the sun was.

If your experience is anything like, mine, a trip to an amusement park typically involved your parents’ agitation growing exponentially with your own impatience until they reached a boiling point that resulted in them forcing you to leave a 3 P.M. to avoid the traffic lines that started outside the park.

There was no such thing as a full day at the park. It usually lasted 10-4, if you were lucky. Starting to remember now?

That may have changed when you reached an age where you were no longer subjected to your parents’ unwanted supervision, but the freedom to go alone to these places didn’t really change much about what you had to deal with once you were there; amusement parks were still synonymous with waiting, screaming and, baking.

It didn’t matter which friends you went with, the result was always the same: frustration and agony. The group would always disagree on what ride to go on at some point; when you’re dealing with toxic levels of heat and anxiety, arguments are inevitable.

You may be reading this wondering about where water parks, if at all, fit into this tirade. They do. The supposed haven of the amusement park—built to cool you off and help you relax—only exacerbated things because the lines were doubly as painful and the free space even more compact. Swimming in a wave pool with 100 other people? I’ll pass.

Like any good argument though, I can’t hide behind broad rhetoric and easily dismissible comments. I need proof, or evidence, that shows my argument rather than tells it.

I can’t stress the line factor enough in this article. The endless wait. The sweltering heat. The incessant small talk between fellow riders. It just sucks. And the worst part is, the ride only lasts about 120 seconds, and then it’s back to reality: more waiting, more contact with people you don’t really care about.

As much fun as amusement park rides are there’s no way the tradeoff of having to wait in line and deal with crowds is equal to the thrill of a 400-foot drop. I don’t know about you but I love peace and quiet. The price of surrendering that for the maximum of patience necessary to cope with the endless waits and mass populated areas is pretty hefty. Speaking of price…

2. The juice is not worth the squeeze

I’m not an economics guy, so if I screw up this brief explanation, please forgive me.

For those of you who don’t know about “price point analysis,” it relates to the price of a given product based on its demand curve. In essence, it’s the basic concept of supply and demand, just at a microeconomic level. Before this gets any more off point, let’s end the lesson here.

What I’m getting at is that prices at amusement parks – just like any other venue of entertainment be it movie theaters or concert halls – continue to rise even though our demand for them has lessened over the years. (Note: “our demand” refers to twenty-somethings and frat bros who are more likely reading this than little kids, or at least I hope).

$5 for cotton candy? Are you kidding me? $55 for an all-day pass? Don’t be outrageous. The $20 locker charge if you want to use the water park? No thanks; I’d rather get ticketed for public nudity. At least I’d have a story to tell.

If theme park owners could come up with a cheap discount for our demographic—$3 Bud Lights and $5 per ride—then I think the demand for them would go back up. As for now, there’s no way the juice is worth the squeeze.

To paraphrase Austin Powers, only two things scare me — nuclear war and carnies.

Circus folk are some of the nastiest degenerates that infiltrate our society, yet they’re almost guaranteed employment until the end of time thanks to our dependency on constant and immediate entertainment. Not only do these people smell, they are just brainless and strange.

And please don’t say, “carnies don’t work at amusement parks,” because that is the epitome of ignorance. Yes, in the technical sense, carnies are people that work at movable carnivals and perform random acts of silliness around the country. With that said, have you ever met a clean, well-spoken amusement park attendant? It’s unlikely.

If roller coasters still bring you what you think is an unparalleled adrenaline rush, then you need your head re-examined. All I have to say to people who plan their summers around amusement park schedules is “Grow up.”

Get a rifle and hunt some game. Now that’s a rush. If that’s too much for you, try surfboarding or water skiing. There are plenty of activities that can help spark your adrenal gland.

I don’t want to be repetitive but just to clarify: water parks suck equally as much as amusement parks. And, most of the time they’re interconnected. Why? Because when you are sick of sweating in the sun, they offer you a cool oasis of fun.

The reality is though that they’re infested with just as many people, if not more, than are waiting in line for the amusement rides. Overall, it’s a lose-lose situation because what your mind really wants is to be alone, or with a small group of friends, at a pool that you don’t have to share with anyone.

I know, I know. Not everyone has the convenience of a friend that has a pool and that’s probably why water parks exist in the first place. However, there are still rivers, lakes, oceans, and community pools available.

Settling for the most crowded, most expensive option—a.k.a. a water park—doesn’t really render any sympathy from me.

Some theme parks are dry, meaning you have to have good, clean sober fun while you’re there or pre-game like a champion at 9:30 in the morning. Either way, alcohol at a theme park is always looked at as a taboo even if the place is “wet,”

Why? People see a boozehound guzzling beer and they think only one thing — he is endangering our safety. And that, my friends, is the worst situation imaginable because the endless stares and gawks burn much worse than the sun.

I don’t know about any of you, but I’d classify myself as a bit of an oaf. At 6’2”, I have all the wrong coordination skills to walk around in a heavily populated area. It’s why I avoid malls and why I walk extra slow at sporting events. The threat of knocking into someone with my unbalanced body always makes me super aware and super cautious.

An amusement park is nightmarish for me because there are so many kids that fly around corners and run up steps that it’s nearly impossible for me not to run into one or several. This could be abated if parents put their kids on leashes, but that would be cruel and unusual.

Similar reasoning to No. 5 about pools, the mind craves certain things and one of those things is comfortable, clean toilets. I think everyone should refuse to sacrifice a single day of his or her summer to go to a place where poop can be found on the floor of the bathroom or, worse, the locker room.

I have seen shit in poop of these areas while at a theme park and therefore wish not to return to them anytime soon, as you can sense from this article.

I touched on this a bit in No. 6, and obviously, safety is important. Why would I opt to pay to spend the day somewhere that I can get stuck upside down for hours when I could just do something that involves less risk in my backyard. There’s no harm there unless you’re playing with a ninja star (see: South Park “Good Times With Weapons” if you need reference).

Anyways, the point I’m trying to drive home here is that theme parks jack up prices and enrage you with lines so that they can put your life in danger. Only in America could something so backward be considered a pastime.

If you go to an amusement park, you’re basically asking to lose track of something fairly vital—your wallet, car keys, sunglasses, hat, phone—at some point.

I have lost three of the aforementioned items and that was enough reason for me to hate amusement parks forever. That corporate refund policy these places have for lost items is hollower than Kevin Bacon’s Hollow Man.

The listlessness of people that are “in charge” can’t really even be described with words. It’s just something you have to experience—or better yet, avoid at all costs.