I have to assume that the people sitting atop the ‘World’s Richest Billionaires’ rankings all know where they stand, and anytime they pass one another they send a card with a penny as a joke or some shit like that.

This newest Bloomberg Billionaire Index is out, and there are some shakeups at the top. Most notably, Amazon‘s Jeff Bezos has jumped into the #2 spot on the list. Jeff Bezos has passed Warren Buffett and Spain’s Amancio Ortega to claim the #2 spot, but he’s still ~$11 billion behind Bill Gates in the #1 spot. Sitting a few spots down on the list is Mark Zuckerberg who lost $118 million since the last ranking came out, and below Zuck is Mexico’s Carlos Slim who has lost $1.13 BILLION since the last time the list was updated. 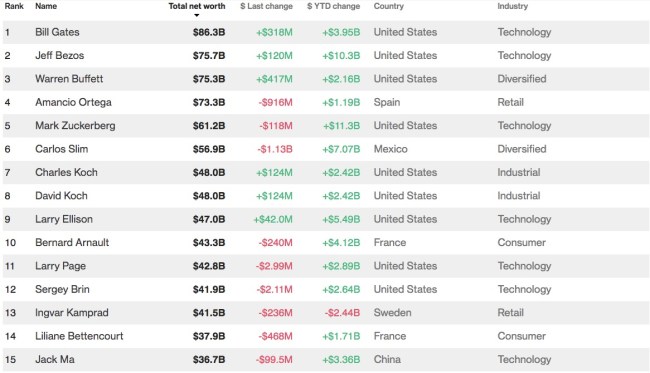